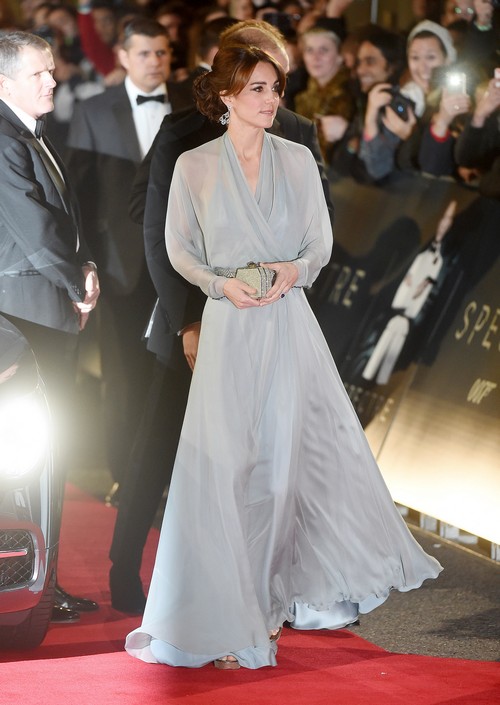 Kate Middleton has been effectively silenced by the royals. The Duchess of Cambridge is to be seen and not heard thanks to dismal public speaking skills. Beyond not being allowed to speak to the press for interviews, Prince William is set to handle all public speaking after the Duchess has been deemed a risk.

The last time Princess Kate was allowed to utter a word in the public speaking platform since the birth of Princess Charlotte. The Duchess’ voice is posh and smooth, but her lack of confidence often comes across as inexperienced and often wooden. Kate has mentioned her fear of public speaking and told a guest at the children’s hospice in 2012 that she finds making public speeches “nerve-wracking.”

It’s likely that the girl who once loved the theater and even sang as Eliza Doolittle in her school’s production of ‘My Fair Lady’ wavers under the pressure of the Palace. Every move the Duchess of Cambridge makes is watched and when she falters, she is quickly informed of her mistakes.

Despite media training, Kate is still a risk to the royals. As a representative of the royal family who has captured the hearts of the public – just like Princess Diana – the Palace knows Kate is an asset that people simply need to see. Princess Kate fits that bill perfectly by smiling with an understated charm, bending knee to children who bring the level of awe to an even deeper level, and conveying an air of approachability.

However, Kate Middleton’s speeches and interviews have been weak. While Middleton was able to sing on stage and even win Prince William’s eye by strutting down a catwalk in a daringly sheer dress at a University fashion show, she tends to stumble with nerves when trying to live up to the royals’ public speaking standards.

The Duchess glides effortlessly into a room, beaming with charm, but becomes a shrinking violet under the pressure of public speaking.

When the Duchess of Cambridge was comfortable speaking to the media, she was open and warm. A little too open and warm. After Prince William and Kate Middleton’s engagement in 2011, their interview was cozy to the point of being to revealing in the eyes of the Palace, who likes to keep things all-business. After that post-engagement chat, the Duchess only did a few scripted speeches in which she stumbled over words and was clearly uncomfortable.

Kate’s use in the media is a purposeful seen and not heard relationship. Perhaps it’s the nerves of addressing the masses, but the Palace has finally closed the doors on unlimited access to Carole Middleton; Kate’s mother and main support.

The royals have attempted to crush the March of the Middletons, but Carole Middleton is unwavering and has already cemented herself and her family – Michael, James, and Pippa Middleton – firmly into the royal family.

Carole is fighting her way back in, and Kate has sent quiet messages she will not shrink away without a fight. Putting Kate Middleton in the position of public speaking isn’t a smart move by the royals during this ongoing battle.