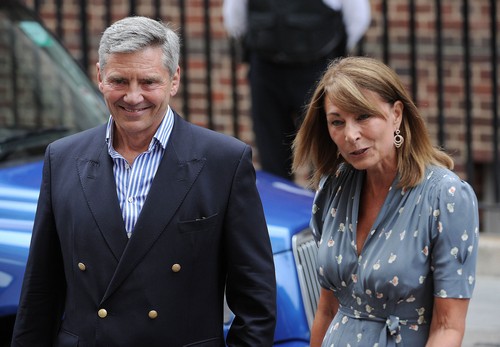 Kate Middleton is hiding another shocking family secret – but her mother Carole Middleton’s latest actions can’t keep it hidden any longer. The Duchess of Cambridge’s mother seems to be drinking more lately as rumors that her 35 year marriage to Michael Middleton has hit the rocks are swirling all over Britain. Queen Elizabeth already despises the commoner Middletons and Carole’s low-class behaviour is reportedly disgusting the monarch.

Carole and Michael Middleton – along with Duchess Kate’s brother James – attended one of the World Rugby Cup match as guests of Prince Harry. Carole had a bottle of wine stashed in her purse and as the match was in progress Kate Middleton’s mum proceeded to drink as much as she possibly could. An insider told Star magazine that this kind of behavior has become a habit – and a worrisome one at that – for Carole.

And now the Duchess of Cambridge is petrified that her mother’s out of control drinking coupled with her parent’s marital problems will create a HUGE problem during the holidays with Queen Elizabeth. An insider says, “It’s a huge concern for Kate. [Carole] will hide the booze at her house, but her mom brings her own!

Last Christmas Carole Middleton had too much to drink and started telling inappropriate jokes.” Duchess Kate was mortified and had to drag her mother away from the festivities.

Prince William is understandably worried about his mother-in-law’s excessive drinking and bawdy behavior. It’s bad enough that the Duchess of Cambridge’s manipulative meddling mum has practically been banished from her daughter’s life – but if Carole shows up drunk at the royal family Christmas party this year Queen Elizabeth will probably want to lock Carole in the Tower of London to keep her from causing any further embarrassment.

The Duchess of Cambridge already threatened her mother at last year’s Christmas bash – she told her to get her act together, stop drinking or SHE’LL ban her from all the royal get-togethers. Kate Middleton is not going to put her standing in the royal family in jeopardy because her lush of a mother can’t keep her drinking to a minimum for a few hours on Christmas Day.

There are enough problems going on in the Cambridge’s marriage right now and Prince William doesn’t need his mother-in-law upsetting his wife anymore. What happens next? Are the royals already planning a Carole-free holiday season?

Let us know what you think in the comments section below and come back to CDL for royal family updates as well as news, rumors and gossip.