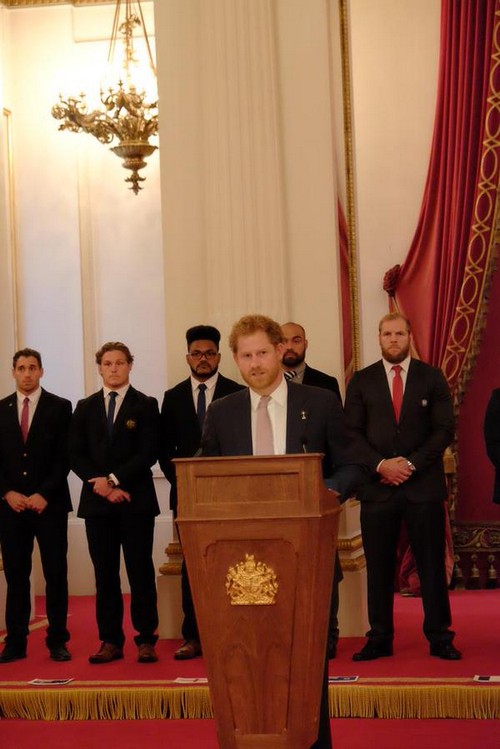 Kate Middleton is making demands on Queen Elizabeth – give Prince Harry more work to do and let Prince William have more time at home with her and the kids. The Duchess has grown weary of the endless joint and solo royal appearances she and Wills have had to make since she came back from maternity leave – and she thinks it’s time for Harry to take on more royal meet-and-greets.

Queen Elizabeth takes demands from no one – usually. But it looks like she may have given in to the Duchess of Cambridge’s request because she is desperate for the couple to work out their differences and fix their fractured marriage. Queen Elizabeth may have thought that some time at home with Prince George and Princess Charlotte would be good for the Cambridges.

Harry is already picking up the slack – he joined the Walking with the Wounded 17 mile trek through Britain, attended several World Rugby Cup matches, then presented awards and gave a speech at the Well Child Awards. On October 12 Prince Harry accompanied Queen Elizabeth, Prince Philip and Princess Anne at the Rugby World Cup reception held at Buckingham Palace.

Who wasn’t there? Kate Middleton and the Duke of Cambridge – and neither were Prince Charles and Camilla Parker-Bowles. It’s no surprise the Prince of Wales and the Duchess of Cornwall weren’t there – Queen Elizabeth can’t stand being in the same room with Camilla.

But it’s a bit of a mystery why the Duchess of Cambridge and Prince William wouldn’t be at the Rugby World Cup reception. Queen Elizabeth received a specially commissioned participants’ award – you think at Wills and Kate would want to be there to support England’s longest reigning monarch.

And while the older generation of Royals was hosting a party at Buckingham Palace for all those handsome rugby players Kate Middleton was home – probably with her feet up. She has to save her strength for the upcoming premiere of “Spectre” the new James Bond movie – and the State dinner for China’s President Xi Jing later this month.

The reception for the World Rugby Cup players has been on the Royal calendar for some time, but we’re not sure whose name was crossed off and whose name was added when Kate Middleton demanded that Prince William spend more time at home. Prince Harry has been attending more than his fair share of events and he certainly deserved a night off! But no – Duchess Kate needed the night off much more – and Prince William absolutely had to be there with her!

Let us know what you think in the comments section below! And come back to CDL for all your Royal news, rumors and gossip!