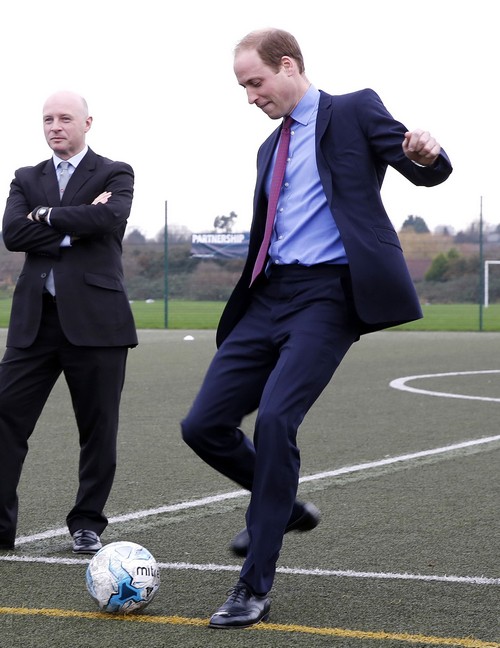 Kate Middleton has defeated Queen Elizabeth by taking over the royal Christmas. Carole and Pippa Middleton dominate the holiday plans as Prince William appears to have caved under pressure of the middle-class Middleton family.

Last year, Kate and Prince William attended church with the Queen on Christmas morning. However, the Duke and Duchess of Cambridge skipped Queen Elizabeth’s lunch in favor of spending the rest of the day enjoying a leisurely holiday with the Middleton family.

As CDL reported, this 2015 Christmas season will be no different, as Kate Middleton along with Carole and Pippa Middleton are planning on taking over Christmas plans.

Prince William did confirm Kate, Prince George, and Princess Charlotte will be headed to the Queen’s Christmas Day church service, but his statement suggested the rest of the day will be a Middleton family affair.

The Duke of Cambridge told ‘The Big Issue,’ “If I get any sleep on Christmas Eve it’ll be good. We’ll go to church as a family on Christmas Day as we always do.” It’s easy to see William was being very specific when it came to his plans for the morning of the holiday.

The current second heir to the throne further gushed about Prince George and Princess Charlotte, “George will be bouncing around like a rabbit. So that will be two children, one who suddenly appreciates Christmas, which could be quite challenging. But I’m looking forward to it.”

However, the statement that revealed Prince William caved, giving into Kate Middleton and the Middleton family demands, came when he underlined the fact that he has a family outside of the royals. William said, “It’d be nice if we got a white Christmas because we haven’t had one in many years. Then we’ll watch George try to tackle his presents as he tried to unwrap them. It’s a very different experience at Christmas, having a family of your own.”

Typically, the royals have their presents laid out and opened on Christmas Eve. Then, on Christmas day, they attend the Queen’s church service followed by a quick lunch before the Queen’s Speech. Children under the age of 11 dined separately during the lunch.

If it wasn’t stuffy enough, everyone then gathers to watch the Queen’s Christmas broadcast. Tradition also dictates the Queen makes her speech from another room – further underlining the separation from the family.

However, the Duke and Duchess of Cambridge will not be participating in the luncheon. Prince William has once again caved to the Middleton family and Carole’s influence. After attending the church service, William, Kate, George, and Charlotte will join Carole, Michael, Pippa, and James Middleton for a relaxed and family-oriented lunch.

CDL covered the reports of Kate and Carole taking over Christmas and Queen Elizabeth’s fury over Kate Middleton breaking royal protocol and traditions. The Queen attempted to remove the influence of the middle-class and commoner influence of the Middleton family – effectively banning Carole Middleton from supporting the royal couple.

However, Carole has a head for business and refused to let the royal family pull another Princess Diana isolation.

In fact, Kate Middleton, Carole Middleton, and Pippa Middleton had a girls night out last week. The Middleton women dined at Clos Maggiore in Covent Garden. There, the trio dined privately and likely discussed Christmas plans.

This was a telling moment, as Carole had been seemingly MIA from Kate Middleton’s life after surfacing from her 4-month long maternity leave. The Duchess dropped small hints that she was regaining control and power within the royal family; the sheer, backless and braless dress moment was a huge message to the Queen Kate no longer afraid of losing her position.

What do you think of Kate Middleton defeating Queen Elizabeth and taking over Christmas plans? Did Prince William cave under the pressure of the Duchess of Cambridge and the Middleton family? Let us know your thoughts in the comment section below and don’t forget to check CDL for more royal news, updates, and reports.

Prince William, The Duke of Cambridge, takes a penalty kick during his visit to Saltley Academy and the Football for Peace project on December 7, 2015 in Birmingham, England. FameFlynet