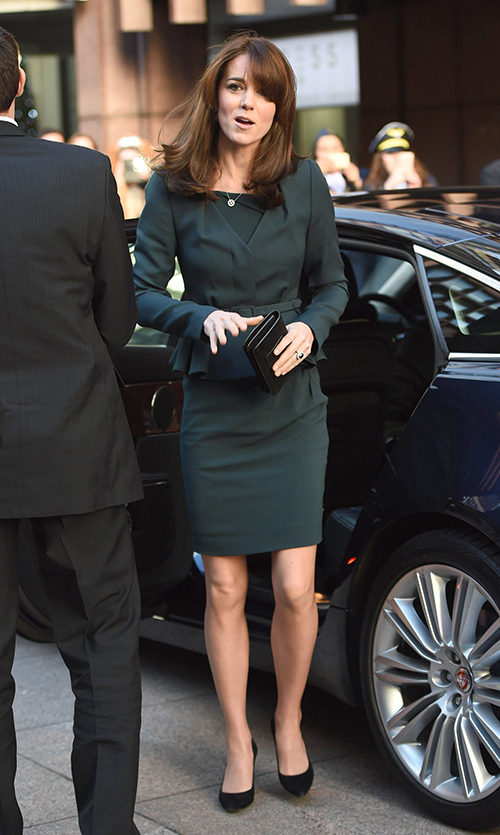 Is Kate Middleton disgusted again? Sweden’s Princess Sofia may have ignited a style war! Did the pregnant Swedish princess insist upon the new Duchess-inspired hairstyle?

Princess Sofia and the Duchess of Cambridge often appear to compete for best-dressed, most-stylish, best mum, best wife honors. Staffers at Prince Carl Philip and Princess Sofia’s palace have remarked in the past that Sofia often conspires to copy Duchess Kate’s style.

For years, many have envied Princess Sofia’s gorgeous long locks. Imagine style watchers surprise when the princess sported the shorter coiffeur recently at the Christmas in Vasastan concert. The new ‘do does bear a striking resemblance to Duchess Kate’s new bob.

Swedish Royalty does not receive near the attention the Duke and Duchess of Cambridge enjoy. Most commoners may not even know that Sweden has a Royal family. Since marrying Prince Carl Philip on June 13, 2015, Princess Sofia, also the Duchess of Värmland, has been hard at work in an attempt to grab the Royal spotlight away from Princess Kate.

Does Kate Middleton think Princess Sofia is copying her style? Insiders reveal that a furious Duchess of Cambridge wanted to ring up the Duchess of Värmland and demand the hairstyle be changed. Did Duchess Kate make an appeal to Princess Sofia to modify the hairdo – perhaps cut it a little shorter?

As previously reported, the Duchess of Cambridge never imagined that there would be any royal bride who could come close enjoying as much popularity as she does. But both Sweden’s Princess Madeleine and Princess Sofia are gaining on Princess Kate in the most popular Royal power play.

The world has grown weary of Princess Kate’s pouting and foot-stomping whenever the Duchess doesn’t get her way. Allegedly Princess Kate’s entitled attitude escalated after Queen Elizabeth allowed the Duchess of Cambridge to wear the Cambridge Love Knot tiara to the recent Diplomatic Reception.

Princess Diana was flattered when the world copied the famous “Lady Di” hairstyle in the 1980s. As Princess Diana’s style changed throughout the years, millions of women changed theirs as well. Kate Middleton should be thrilled that Princess Sofia is copying the future Queen’s style. Isn’t imitation the sincerest form of flattery?