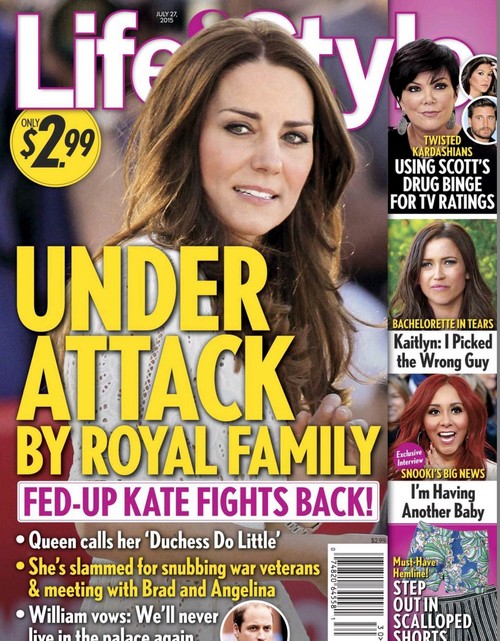 Prince William’s wife Kate Middleton might have married into the royal family, but as far as Queen Elizabeth is concerned she will always be “Commoner Kate” and “Duchess Do-Little.” Since Kate Middleton married Prince William and gave birth to Prince George and Princess Charlotte, she has been going above and beyond to prove to the royals that she is worthy of her new title – but Queen Elizabeth is unimpressed with her efforts.

This week’s cover of Life & Style Magazine features a photo of a distraught Duchess of Cambridge, and the headline reads: “Under Attack By Royal Family – Fed Up Kate Fights Back.” The July 27 cover goes on to tease that Kate has been “slammed for snubbing war veterans and meeting with Brad and Angelina instead.” Apparently Prince William has taken Kate Middleton’s side, because the cover also teases that he has vowed that they will “never live in the palace again.”

According to the July 27 edition of Life & Style Magazine, tensions have been mounting between Kate and the royals for quite a while – but they erupted during Princess Charlotte’s christening in on July 5 and there was a bitter showdown at the royal event. L&S Magazine reveals, “The Windsors were fuming that not only were none of them chosen as godparents, but William and Kate didn’t make an effort to strengthen political ties by putting a monarch from another country on the list of five guardians.”

When Kate Middleton skipped out on meeting with veterans to go to Wimbledon with her sister Pippa and rub elbows with celebs – Queen Elizabeth was officially fed up with the Duchess of Cambridge. And, the fact that Kate has been over-spending and just dished out $92,000 on renovating a tennis court at her home only pushed the Queen farther over the edge. Queen Elizabeth seems to be railroading everyone against Kate Middleton, the royals, the public, and everyone on social media – especially bloggers.

According to Life & Style Magazine, Kate Middleton is fighting back though. An inside source dished to the tabloid, “Kate is fed up with sniping from the queen as well as from others in the family, and she has told William so. She is not going to be told which jobs she should and shouldn’t do.” William has reportedly taken his wife’s side and ordered the royal family to “back off.”

Who do you think is in the wrong, Queen Elizabeth or Kate Middleton? Is the Duchess of Cambridge being lazy and not handling her royal duties? Or does the Queen need to relax a bit? Let us know what you think in the comments below!