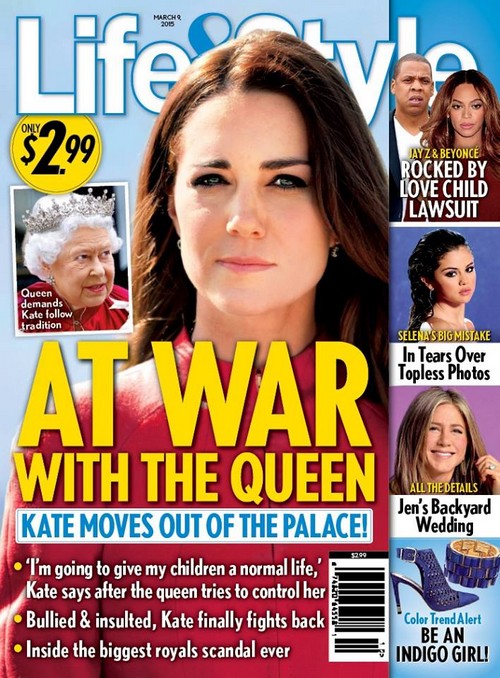 Pregnant Kate Middleton and Prince William’s grandmother Queen Elizabeth are already feuding over Kate’s baby girl – and she isn’t even scheduled to give birth until April 2015. Since Kate Middleton married Prince William and they began creating a family of their own, the Duchess of Cambridge has had a tough time following the Queen’s strict regulations and rules. According to a new report from Life & Style Magazine, Kate has finally stood up to Queen Elizabeth – and the two Royals are embroiled in a major feud.

The March 9th cover of Life & Style Magazine features a photo of Prince William’s pregnant wife Kate Middleton and teases, “At War With The Queen: Kate Moves Out Of The Palace.” The L&S cover goes on to reveal that Kate Middleton wants “to give her children a normal life” and is “tired of the Queen trying to control her.” Kate and Queen Elizabeth’s latest feud is dubbed the “biggest royals scandal ever” by the tabloid, and Life & Style Magazine teases that “bullied and insulted Kate finally fights back.”

The latest feud between Kate Middleton and Queen Elizabeth, who have never really seen eye to eye, emerged when Kate announced that her mother, Carole Middleton, would be helping her raise her baby girl after she is born in April – and Kate will not be hiring the nanny that Queen Elizabeth selected for her. Life & Style Magazine’s report reveals that Kate and Prince William found themselves on the receiving end of Queen Elizabeth’s wrath – and after the 88 year old monarch raised her voice and screamed at Kate about who would raise her new baby, a disgusted Kate stormed out and left the Palace. Queen Elizabeth despises Kate’s commoner family The Middletons, so this may not be entirely about hiring a nanny, the last thing the Queen wants is for an heir to the throne to be raised by a commoner with questionable morals.

Regardless of why Queen Elizabeth lashed out at Kate Middleton or what exactly was said – the bottom line is that the Duchess knew what she was signing up for when she married Prince William. You can’t expect to be treated like royalty, but not pay your dues and act like royalty. Do you think that Queen Elizabeth crossed a line? Or is Kate Middleton being unreasonable? Let us know what you think in the comments below!