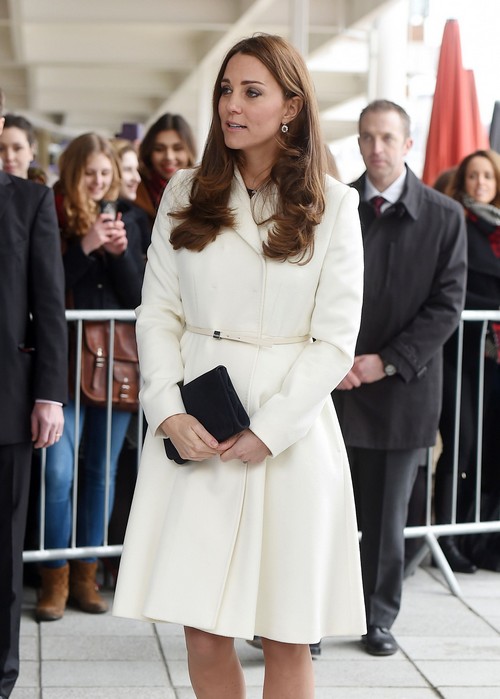 Kate Middleton has had it with being used for producing heirs and spares as well a being the royal PR distraction from the terrible Prince Andrew scandal. Kate is upset and she intends to let Queen Elizabeth know that any future children Prince William wants can be adopted and any future scandal caused by her degenerate son can be dealt with by a PR firm! Despite the fact that she’s now in her third trimester and mere weeks away from giving birth to her second child, Kate Middleton is still being paraded around as though she’s the royals’ prize show horse. For one, her baby bump and her pregnancy have been invaluable in distracting the media and public from the royals’ ever-growing list of scandals, and as such, she’s become the royals’ #1 PR tool. But does she get a say in all this? Please.

Of course Kate Middleton has no say in how she’s being used by the royals. If this was pre-royal wedding and pre-Prince William marriage, then sure, she might have had some leverage over how she’s being used. But once you sign a deal with the devil, the deal stays signed – and Kate Middleton unofficially signed her life away when she agreed to marry Prince William and enter into the royal family. The Duchess of Cambridge knew she’d be expected to produce an heir and spare ASAP but she didn’t expect to have to work when 7 months pregnant. Of course once you marry a future King of England you’re life is not your own… just look at what happened to Princess Diana.

Why do you think Cressida Bonas ran the minute things started getting serious with Prince Harry? Why do you think Cressida’s half-sister, Isabella Calthorpe, refused to marry Prince William despite being in a serious relationship with him? Neither Cressida nor Isabella had much to gain, and everything to lose, by joining the royal family. Kate, on the other hand, comes from a ‘commoner’ family [by relative standards], and had already spent half her adult life trying to snag Prince William. What, she was going to give that up? Not a chance in hell.

However, we are hearing that things are getting too strained, even for Kate Middleton’s usually iron disposition. She’s more or less being forced into working non-stop when most other expectant mothers at her stage would be at home, resting. And for all intents and purposes, Kate’s going to continue working until mid-March, which could be less than a month away from her due date!

So really, is it a big surprise to hear that Kate is thinking of telling Queen Elizabeth that she refuses to have anymore children – that’s right, no more babies for The Duchess? Plus Kate demands a massive break after giving birth. She’s reportedly planning to stay away from the public spotlight for a good long time after giving birth to the spare to the heir – hence, the move to Anmer Hall and away from Kensington Palace. What do you guys think? Is Kate spoiled and lazy? Should she gladly help the royal family and do their bidding, after all Kate Middleton is now one of the most famous people on the planet! Let us know your thoughts in the comments below.