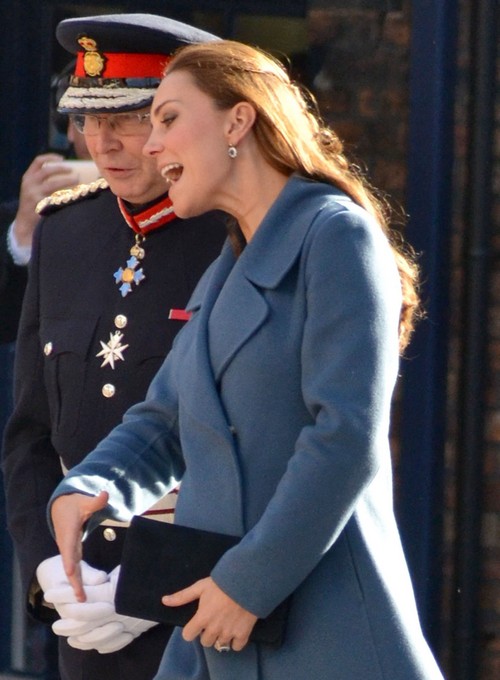 Kate Middleton is a 33-year-old pregnant woman in her third trimester with grey hair, a massive baby bump, two months away from her due date and giving birth to her second child. You know what most other pregnant women in their third trimester would be doing? Resting. Taking leave from their job. Preparing for their birth. But Kate Middleton? Well, as the royals’ most prized PR tool, she’s being forced into making public appearance after public appearance.

Early this morning, The Duchess of Cambridge visited the Emma Bridgewater factory in Stoke-On-Trent, a pottery factory that designs a range of mugs for the East Angelica Children’s Hospices. Today’s event specifically focused on raising funds for The Nook, which is one such local children’s hospice.

Kate has been a patron of the factory for more than two years, and thus, she turned up in her best royal blue coat and posed for several photographs before heading inside. Then, if one event per day wasn’t enough, Kate Middleton is also scheduled to attend the Action for Children’s Cape Hill Children’s Center in Smethwick, West Midlands, where she will attend private discussions with vulnerable families and children.

Let me remind you that Stoke-on-Trent is in Staffordshire, and Staffordshire isn’t exactly right next to Smethwick. That means that in addition to the actual events themselves, Kate will also have to factor in travel time and also the time required to change into a different outfit.

I’m telling you – the girl is having second thoughts about signing up for all this. Her schedule wasn’t anywhere near this grueling when she was pregnant with Prince George, and it’s obvious that she’s being used as the royals #1 distraction tool from Prince Andrew’s disgusting underage sex scandal. The royals are trying to use Kate and her pregnant baby bump to distract the public – and parliament – from the fact that Prince Andrew spend hard-earned taxpayer money on underage prostitutes. But the real question – is Kate succeeding at her job? Especially since she’s being forced to work literally weeks up to her due date, which is in April. And sources have already confirmed that Kate will be making appearances until March, which literally leaves her weeks for recuperation and preparation.

The Duchess of Cambridge has a go at painting ladybirds on pottery designed for @EACH_hospices @EmmaBridgewater pic.twitter.com/P2EkCchvDD