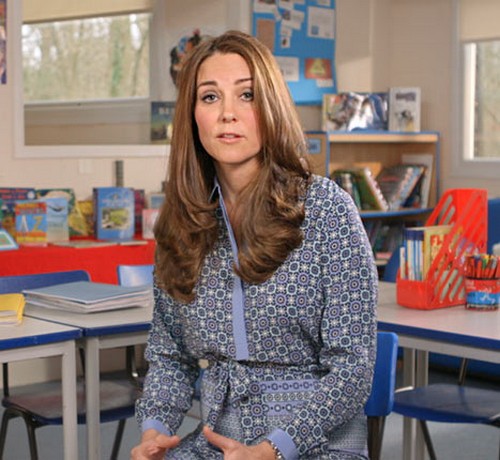 Kate Middleton has lent her face and voice to a PSA recorded for UK’s first Children’s Mental Health Week. The clip shows Kate giving her endorsement to the group Place2Be, which provides mental health services in all schools.

Kate – who is clearly showing her seven months-old baby bump, might I add – explained in the clip, “Both William and I have seen that many young people are struggling to cope with the impact of bullying, bereavement, domestic violence, family breakdown and more. Without support, the effects of these challenges can be traumatic, leading to serious issues such as anxiety, depression, addiction, and self harm.”

The video was reportedly recorded at the Bethlem and Maudsley Hospital School in Beckenham, England, where Kate received a lot of media attention for playing the ukelele last week.

They’re PR geniuses sometimes, these royals. Even though Kate Middleton is seven months pregnant, they’re still continuing to trot her around like their prize show horse. And what’s worse, they’re not even reining in her schedule. If you look at the past few weeks, Kate’s made more public appearances – barring her brief ‘vacation’ to Mustique with her husband, Prince William, and her son, Prince George – than the rest of the royals combined, which really shouldn’t be the case for someone about to give birth in two months. Kate’s due date is coming up in April, which means that in her third trimester, Kate really should be resting. Goodness knows, she’ll have her hands full once the second baby arrives, and yet, she’s still making public appearance after public appearance.

I mean, recording a PSA for UK’s first Children’s Mental Health Week is a fantastic cause to support, but the cynical part of me can’t help but wonder if the royals are purposefully sending Kate on these empathy-garnering missions to distract the public from the recent royal scandals. Oh look, Kate Middleton is recording a PSA for UK’s mental health week…. what, Prince Andrew had an underage sex scandal?

What do you guys think? Agree or disagree? Let us know your thoughts in the comments below.