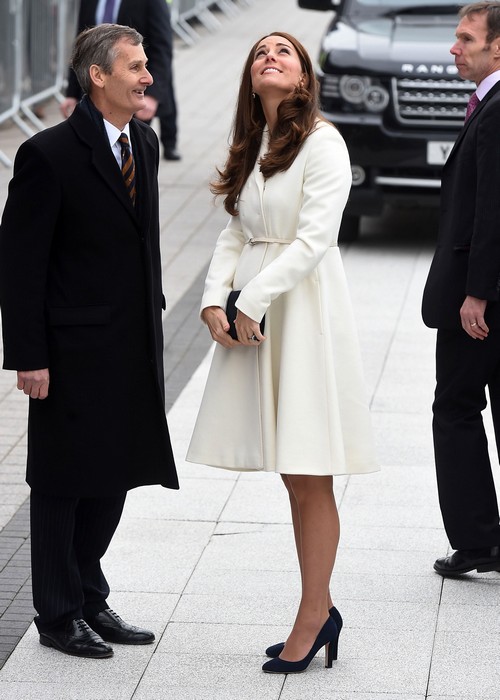 Kate Middleton is tired and pregnant, you guys. The Duchess of Cambridge shows grey hair and checked her pulse in baby bump photos taken at her official Portsmouth outing at Ben Ainslie Racing. In fact, she’s now seven months pregnant and really should be at home resting, not being the royal family’s unofficial PR tool in fixing their public image. Unfortunately, Kate’s not the one making those decisions, and as such, she was forced to make yet another public appearance earlier this week in Portsmouth. Kate and her seven-months-old baby bump made an appearance at the Headquarters of the 1851 Trust, and the site of Ben Ainslie Racing on Thursday, February 12th. However, signs of her exhaustion were starting to show, including a few grey strands of hair.

What?! Kate Middleton boasting grey strands?! What has the world come to?! In all seriousness, Kate can’t technically use hair dye because she’s pregnant and most dyes are toxic to the fetus. And since she can’t stay at home and hide – even though that’s definitely her preference – she’s being forced to come out in public and show the public that yes, she does have a few grey hairs. Now, grey hairs are nothing to be ashamed of, but for someone who’s usually so impeccably tailored and coiffed, I guarantee you it’s mortifying. But you really think Queen Elizabeth would accept a few grey strands of hair as a solid excuse for missing an event or public appearance?

Kate’s team is also making sure that she doesn’t get overworked, frequently checking her pulse and making sure she takes breaks. We’re going to reiterate – at seven months pregnant, Kate should be at home resting, not working. She’s due in April, and that’s literally two months away. Sure, she can cover her baby bump in white coats and fancy peplums, but that’s not going to help her if she faints from exhaustion.

In their third trimester of pregnancy, most women are sitting at home and resting and sleeping, not going from one event to another, dressed up to the nines and hobbling around in heels. Plus, it’s not Kate’s fault that the royals are embroiled in so many scandals right now, and she shouldn’t have to pay the price for it. Her pulse rate and her hair color might be suffering, but the royals should also be thinking of the unborn child’s health.

What do you guys think about Kate Middleton’s mid-week appearance at Ben Ainslie Racing in Portsmouth, England? Let us know your thoughts in the comments below.