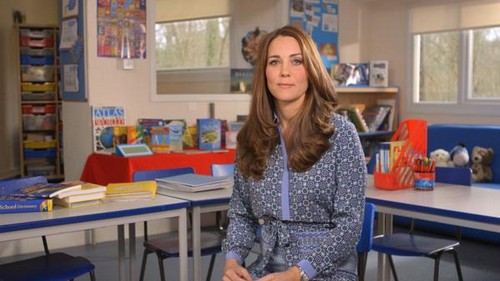 Kate Middleton’s due date is much earlier than expected according to new reports. Kate Middleton’s pregnancy and baby bump are being paraded around for the whole world to see, courtesy of the royals and their insistence on Kate’s never-ending schedule. Kate has been making public appearance after public appearance, despite the fact that she’s now in her third trimester of pregnancy.

Of course, the mere fact that Kate Middleton is very, very pregnant and set to give birth in April doesn’t seem to have stopped the royals from using her as their show-and-tell doll. And what’s even more worrisome for her health is the fact that her due date was initially thought to be at the end of April, but is now said to be beginning-to-mid April.

The palace has only confirmed that the baby is due in April, not when in April. However, it was initially thought that Kate was only five or six weeks pregnant at the time of her pregnancy announcement, all the way at the beginning of September. However, an artist by the name of Paul Cummins has revealed that Kate almost didn’t come see his Blood Swept Land and Seas of Red Installation at the Tower of London on August 5 because she was already suffering from Hyperemesis Gravidarum. That means that if Kate was already pregnant and sick at the beginning of August, her due date might more accurately be at the beginning of April – or at least, the middle of April.

Royal sources have suggested that Kate Middleton is planning to continue her rigorous public appearance schedule until mid-March, when she will reportedly stop and rest for another month before giving birth. But if this new schedule is accurate, that means that Kate might have literally a few weeks rest before she’s in the delivery room, giving birth to another royal baby.