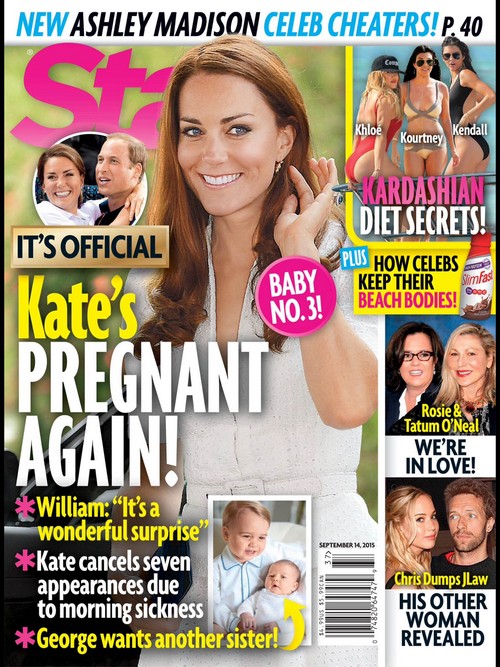 Royal gossip surrounding Kate Middleton being pregnant is going into overdrive thanks to Kate’s noticeable absences from social and royal events. Rumors claim the Duchess is expecting, but we all know Kate Middleton is NOT pregnant with her third child. The Duchess of Cambridge’s isolation is likely due to Prince William and their marriage trouble, not morning sickness as claimed by Star Magazine!

It’s no secret that Kate and William have wanted a big family. The Duchess grew up with two siblings – James and Pippa Middleton – and she’s smart enough to know producing royal babies gives her a value to the royal circle and solidifies her position. Following that desire and Kate’s seclusion, Star magazine claims that Kate Middleton is pregnant with her third child.

“She’s in the early stages of pregnancy with baby number 3,” the source alleged. The report suggests Kate didn’t attend the wedding of Bear Maclean and Daisy Dickson because “she’s not taking any chances.” CDL sources are laughing off the Kate Middleton pregnancy rumor and insist – Kate Middleton is NOT pregnant with third royal baby.

One detail is true, Kate Middleton certainly isn’t taking any chances. Kate and Prince William are in the middle of dealing with marriage troubles. In fact, Queen Elizabeth has noticed the Duke and Duchess of Cambridge’s relationship crumbling and has summoned them both to Balmoral for a meeting under the guise of celebrating her milestone of becoming the longest reigning monarch. There, the Queen will once again intervene to save their marriage after stepping in during the separation in 2014.

Kate Middleton is very aware of her jeopardized marriage, and having another baby right now would be a very unwise move. The pregnancy would add to the stress and worry Prince William will find a mistress. Another troubled pregnancy would pretty much guarantee William would cheat.

The report also notes that, “Kate’s third baby is apparently due in late April or early May, so she’ll likely be showing by the New Year. She knows the paparazzi will try everything to get the first photos of her bulging swimsuit — that’s why she wanted to take an earlier vacation. She figures her bump won’t be prominent in Nov., so she can relax in her bikini without her pregnancy being so obvious.”

Wrong. Kate is watching Prince William like a hawk. The Duchess has moved up her annual Middleton trip to Mustique so she can tour the Caribbean with Prince William. Joining the future monarch on his trip will ensure William is on his best behavior and has no opportunity to have an affair.

What do you think of Kate Middleton’s third pregnancy rumors? Let us know in the comment section below.