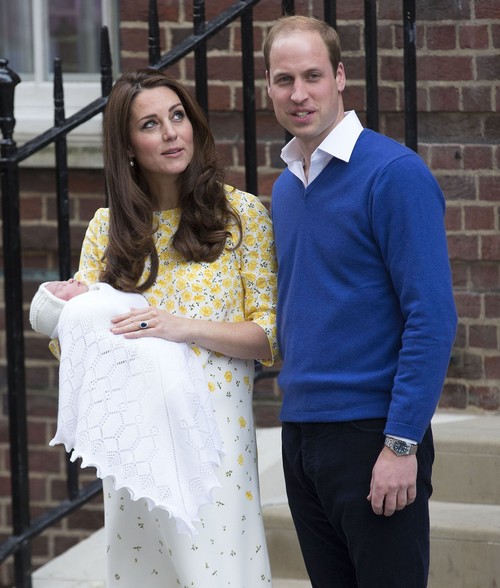 Kate Middleton has seemingly disappeared from the public eye, leaving the world to speculate what is going on behind the scenes of the royal lives. One rumor suggests Kate fears the parallels she shares with Princess Diana; the postpartum depression and feuds with Queen Elizabeth, leading the Duchess of Cambridge to seek privacy and comfort at home.

It’s hard to ignore the similarities between Kate Middleton and the late Princess Diana. Most of the world adores Kate, much like the world was captivated by Lady Diana Spencer. Both women were identified as commoners, despite the fact that Diana was the daughter of Earl Spencer and had an aristocratic upbringing. The Duchess of Cambridge has a more humble background; the daughter of a successful business owners, Michael and Carole Middleton, who created Party Pieces. Regardless, Kate and Diana are seen as relatable and accessible. Diana’s humility and kindness quickly earned her the moniker of “The People’s Princess.” Kate Middleton has followed her footsteps and several media outlets have occasionally dubbed her “The People’s Second Princess.”

Princess Diana and Kate’s royal relationship with their respective suitors – Prince Charles and Prince William also have rather eerily similarities. Prince Charles infamously fell for Camilla Parker-Bowles and was desperately in love with her, but Camilla went on to marry Andrew Parker Bowles in 1973. The marriage didn’t stop Charles and Camilla from having an affair. In 1979, after the death of Lord Mountbatten, Prince Charles leaned on Camilla and allegedly asked her to leave Andrew and marry him. Camilla refused, pointing out that the scandal would force Charles to renounce the throne. Prince Charles moved on, pressured to marry, and Lady Diana was chosen as his bride.

Kate Middleton and mom Carole Middleton practically hunted Prince William down; switching schools to pursue the royal before enduring a long relationship which William temporarily ended to pursue Isabella Calthorpe. The model refused to marry William, telling the Prince she is “too much of a free spirit” to endure the royal lifestyle. Isabella went on to marry Sam Branson, but royal aides claim that Kate Middleton still gets “jittery” if Calthrope and William are at the same event according to Express. As we all know, Prince William ran back to Kate when it was time to procreate and the two married.

Diana gave birth to Prince William in 1982, Prince Harry following in 1984. According to Andrew Morton’s book, ‘Diana: Her True Story,’ Lady Di was battling depression, bulimia, and even several suicide attempts after her heart was broken by Charles and Camilla’s affair and the pressure of the royal lifestyle broke her down. Queen Elizabeth essentially dismissed her, dubbing her as “mad,” which is Brit-speak for crazy. Similarly, Kate is struggling to deal with the demands of the Queen, the fear of Prince William’s infidelities, and quiet cases postpartum depression. The royals are quick to cover up signs of trouble, hiding Prince William and Kate Middleton’s month-long separation with a cover story of hyperemesis gravidarum during Kate’s second pregnancy.

Kate Middleton also takes control into her own hands with the help of her mother, Carole Middleton. The two commoners have instigated a royal revolution which has broken royal protocol. Princess Diana first broke the mold, paving the way for her presence in her children’s lives. Diana eventually rose from the storm she endured with cheating Prince Charles and Queen Elizabeth and fought back allegedly saying, “We’ll find out who has a greater command of the affection of the British people.” It was obvious Diana wielded the great power, and began playing the royal’s game.

Kate is seemingly on a similar path. The Duchess has become rather reclusive as Prince William appears to be leaving his wife to tend to two small children while he enjoys an active social life filled with weddings, stag nights (bachelor parties to Americans), and weekend events; most recently supervised by Kate’s sister Pippa Middleton. Kate Middleton has control of the Prince’s schedule; declining his attendance at planned trips with select friends as far out as December. The control echoes Princess Diana’s attempting at putting her foot down and ousting select friends of Prince Charles, banning them from Highgrove.

Perhaps, Kate Middleton’s absence from the public is due to depression, exhaustion, or just her preference for being at home with Prince George and Princess Charlotte. Or, maybe it is a move in the Duchess’ efforts in securing herself in the royals’ lives and the public’s favor? Kate has shown she has no fear in packing up her collection of fabulous hats, leaving Prince William, and waltzing out the door to seek refuge in childhood home in Bucklebury.

One thing is clear, Kate will return to the public eye when she is good and ready. The press is already gearing up for The Duchess of Cambridge to make an appearance. Buzz of another foreign royal tour has already begun and, so far, the media split. People insists Kate and William will not be bringing Prince George and Princess Charlotte on their tour, while the Daily Mail gives a contradicting report that the royal children will join the Duke and Duchess of Cambridge. Maybe the split is a signal of the royal couple’s contradicting stances. Kate, perhaps justifiably concerned, most likely doesn’t want to leave her children in the care of nannies and give open access to Prince Charles and Camilla Parker Bowles.

The royals carefully calculate and attempt to control every iota of their lives and what the press report. Kate Middleton is no different. The Duchess isn’t afraid to cautiously evoke the memory of Princess Diana when it suits her agenda, but their parallels are on such a similar track it’s likely troubling to Kate. Diana won the people’s hearts, but she lost her life trying to escape the press she used to her advantage during her war with the royals.

What do you think of Kate Middleton and Princess Diana’s life parallels? Let us know in the comment section below.