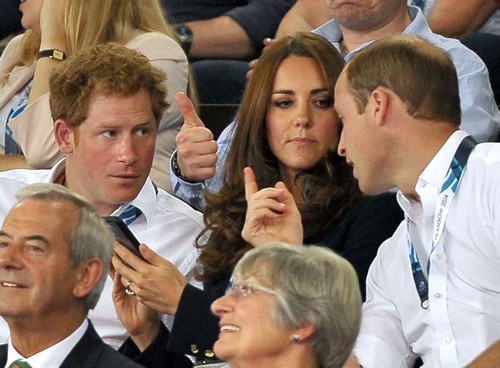 Kate Middleton, Prince William, and Prince Harry have all entered the 21st century, just as the rest of the world is ringing in 2015. Even though the royals had all been using the official Clarence House Twitter as their ‘official’ means of Twitter communication until last year, they have finally exercised their right to more independence and gotten their own Twitter handle. Welcome to @KensingtonRoyal, which is now the new Twitter handle for Kate Middleton, Prince William, and Prince Harry – a.k.a. the ‘young’ royals. Their first tweet read, “Hello from Kensington Palace! Welcome to our new Twitter account.”

Obviously, I wouldn’t expect any informal postings from either Kate, Will, or Harry, especially since there will be a special PR team assigned specifically to manage the Kensington Royal twitter account. However, it’s more likely that this Twitter feed will be more geared towards the younger royals, i.e. focusing on the charity work that they all do, keeping abreast of any major royal engagements that they attend, and basically adhering to the ‘younger’ generation of royals and their followers. No more stodgy and stuffy stories about Prince Charles and his latest public gaffe, and no more whining from Camilla Parker-Bowles or Sarah Ferguson’s socialite events.

I don’t know if Prince Andrew’s sex scandal fiasco had anything to do with Kate, Will, and Harry finally deciding to get their own Twitter account, but I’m sure it helped their decision to separate themselves from the elder royals. They probably also realized that they didn’t want to be lumped into the same category as them, considering the role that Twitter now plays in forming public opinions. Better to get their own Twitter account, and then deal with the publicity as it comes.

What do you guys think about Kate Middleton, Prince William, and Prince Harry joining Twitter? Let us know your thoughts in the comments below.