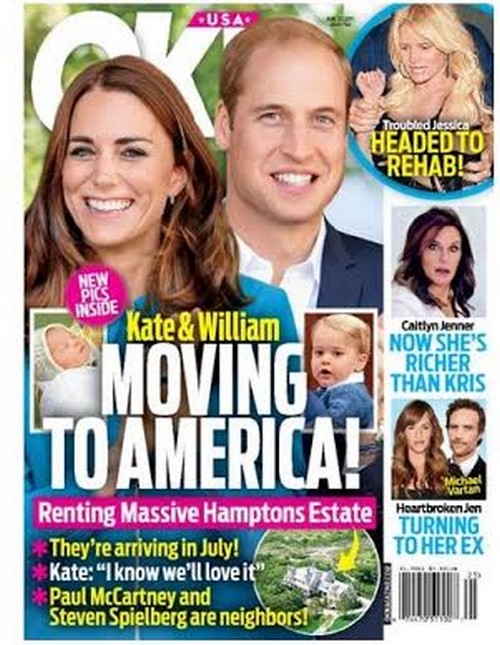 Are Prince William and Kate Middleton packing up Prince George and Princess Charlotte, and moving to America? According to the June 22 cover of OK! Magazine, Will and Kate are “renting a massive Hamptons Estate,” and they are scheduled to arrive here in the United States in July. The cover goes on to say that the royal family will be living next door to Steven Spielberg and Paul McCartney, and Kate just knows “that they will love it.”

Prince William and Kate Middleton are the future King and Queen of England – do you really think that they are going to slum it in the Hamptons for the summer eating hot-dogs with Paul McCartney and Steven Spielberg. Will and Kate’s family and close friends literally own private islands, the thought of them vacationing in the Hamptons is absurd on so many levels. An insider dished to OK! Magazine, “They have always wanted to have a home somewhere abroad, and they have considered everything from Australia to small European islands.” Really, so they chose to rent a house on the coast of Long Island – over Australia or their own private island in Europe?

OK! Magazine’s absurd story about Prince William and Kate Middleton moving to the Hamptons did get one thing right though, according to their insiders Queen Elizabeth is furious. Well, duh. The insider revealed, “The Queen is not happy at all and that’s putting it mildly. She has all but forbidden this move, which she finds very low-class.” Here’s the thing, if by some strange course of events Kate and Will did decide to move to the Hamptons, Queen Elizabeth WOULD forbid it – not “all but forbid it.”

First and foremost, Kate and Will could never move to the United States or even rent a home there because it would not look good to their British subjects – they would look like traitors. Secondly, Kate Middleton is the royal family’s cash cow, they need her there to make rounds of public appearances and keep up the royal family’s publicity. Then there is the obvious reason that OK! Magazine’s story is completely ridiculously – Princess Charlotte is a month old, in July she will be a whole two months old, Queen Elizabeth is not letting that baby out of the country. Heads would roll before Queen Elizabeth would allow Kate to pack up the royal heir and the spare and move them to America for an entire summer.

Do you think that Prince William and Kate Middleton would ever vacation in the Hamptons? Even if by some miracle they wanted to actually rent a home in the Hamptons – would Queen Elizabeth let them take the kids to America for the summer? Let us know what you think in the comments below!