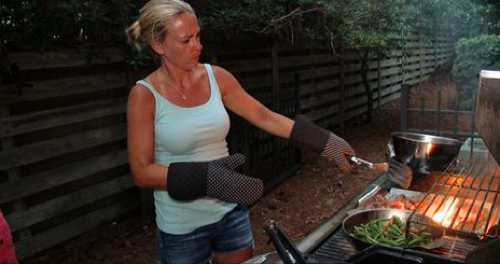 Tonight on TLC Kate Plus 8 returns with an all new Tuesday December 15, season 4 episode 2 called, “Florida Fun.” and we have your recap below. On tonight’s episode the gang is still in Florida, where some of the kids go deep-sea fishing, but their adventure is cut short by seasickness.

On the last episode, season 4 began with the end of the school year and a trip to Florida. Also: Kate cooked a traditional Korean barbecue dinner and discusses the kids’ heritage. Maddie and Cara talked to teenage boys at the beach which might make Kate feel uncomfortable. Did you watch the last episode? If you missed it, we have a full and detailed recap right here for you.

On tonight’s episode as per the TLC synopsis, “the gang is still in Florida, where some of the kids go deep-sea fishing, but their adventure is cut short by seasickness. Later, Mady and Cara look up recipes to cook the family dinner; and the kids have fun on their first trip to a water park.”

Tonight’s episode is going to be filled with the usual Kate Plus 8 drama and you won’t want to miss it, so be sure to tune in for our live coverage of the show tonight at 9 PM EST! What kind of drama do you think will unfold in this fourth season of Kate Plus 8? How excited are you that Kate Plus 8 is back with an all new fourth season? While you’re waiting for tonight’s episode, sound off in the comments below and tell us what your looking forward to most this season and from which Gosselin.

#KatePlus8 starts with the family still in Florida on vacation. They spent a day at the beach, did an escape room challenge, and enjoyed Korean barbecue. Kate says there’s still so much to do. They go to a family sand castle building class. The teens are not interested and wander away complaining about the heat. The younger kids seem more into it.

Kate says the kids were all about it once they started experimenting. They made towers in pairs and Kate says Collin and Hannah partnering surprised her. The boys say it’s harder than they thought to build a sandcastle. Kate says the sandcastle coaches were great and really got the kids into it. Kate says she likes their working as partners and says it was a good memory.

Next up, Kate has decided to have the kids do tie dye shirts. Kate says she likes to do a messy project on beach vacations and we see a flashback to them painting themselves with pudding. Last year they painted and then this year is tie dye shirts. Mady says they’ve all done this before and don’t need help. The kids explain how to do it with the rubber bands.

Then they squirted dye on the shirts. Kate says hers looks like it has the flu. Now Kate is taking the kids out deep sea fishing. Kate says she loves being on a boat but her kids get seasick. The teens decide to stay home and miss the vomit. They volunteer to miss it and cook dinner for the family. Hannah also stays behind.

Kate says she’s surprised Alexis went since she loves animals and that Leah went because she usually won’t go anywhere without Hannah. They head to the marina and get on the boat. They spot a pirate ship and a pod of dolphins. Kate’s hoping the kids won’t get sick and it will be a good experience. We see a flashback to the kids when they went on a boat when they were little and were all vomiting.

She says they couldn’t grab buckets fast enough and the kids were just horribly ill. Kate says she feels peaceful and calm on the ocean and hates that her kids can’t enjoy it. The kids are trying to fish this time and Joel and Alexis are struggling to pull in a fish. Joel catches an amberjack. The boys agree the fish were pretty but smelled bad.

The teens talk about what to make and are considering a spinach artichoke bake. Then they consider zucchini pizza. The teens don’t want to make meat and argue against including protein in the meal. The other girls talk about how the teen girls do a good job of mac and cheese. On the boat, the others are fishing and Kate is helping them reel in the fish.

The kids talk about the motion of the boat and we see Kate helping the kids try to fight the queasy sensation. She also brought vomit bags, clean clothes, towels and ginger ale. Aeden is vomiting overboard then goes to lay down. Kate talks about the teen girls cooking dinner. She says their cooking is mood-dependent.

She says they can make a dinner and clean up better than she can but only if they are in the mood. She says Marley was with them so this was better since they had a friend. Kate is worried about Leah while she’s juggling a reel of her own. Leah is throwing up in a bag now. She doesn’t want to talk about it on camera. She also goes to lay down. Kate says they have two down now.

She says she hates that the kids don’t like something that she really enjoys. All the kids want to go home. Kate agrees. She says they had to call it a day because you have to do that as a mom. She says she knows they did this for her and she appreciates it and still hopes one day they can board a boat without getting sick. The kids says that mom can go alone next time.

Back at the house, dinner was still underway. Kate says she showered the kids then got to sit down and rest while dinner was being cooked. The lasagna pockets go over really well with the kids. Some of the kids complain about the zucchini but overall it’s a hit. Next Kate takes the kids to the waterpark. She says she doesn’t like those.

She says it bothers her germaphobia. She says they’ve never gone to one before because of her issues but takes the kids today. The teens aren’t into it either and say they’re only there because they have to be. Mady says they do a lot of stuff because the little kids want to and they’re glad to have Marley there to make things fun.

Kate says it’s hard to watch that many kids at once. The little kids complain about corralling. She and Andrea make a plan. Andrea goes up with them while Kate waits at the bottom of the ride. Kate says she’s glad she did this since the kids are so excited. Kate finds a raft shaped like an eight and says it’s her plus that.

Mady finally has some fun too after she complains about the recycled water. The kids talk Kate into doing the lazy river. She got separated from the others and Collin swims her along holding her raft. She says he caught them up. Collin says he was walking in the water. Then they caught up and went slow. Kate says the problem was trying to get out.

Joel got sucked on by the river and they have to grab and try to get him back. They make a chain to get him out. Kate says they got sucked back in and had to go around some more until they can get out of it. Kate says this is not her thing but she exposes them to things that she likes and so she had to expose herself to something they liked.

Kate next takes her kids to a live alligator show. She says Alexis has a thing for alligators and crocodiles and thinks they’re amazing. The place is called Gator Beach. The guy talks about how hard the bite is of even the small gators. Alexis raises her hand to volunteer and comes down to participate. Kate goes down with her.

The guy leading the session jokingly asks her to go get an alligator. Then they bring out a little alligator named Olaf. He asks Alexis to take the tape off the alligator’s mouth – Kate thinks he’s joking and says her daughter will do it. Then the trainer scares her with the alligator. He asks why they would let her do that and not say something. She gets to hold the alligator and is all smiles.

Later they get to feed the gators from fishing rod type things. Kate says the kids have a good time but it was definitely Alexis’ moment to shine. Now Kate starts them packing up for the trip home. Kate says they buy souvenirs and so things aren’t fitting like they did on the way down. Kate says she loves vacation even if it’s more work for her and wishes they lived at the beach.

The kids talk about their favorite parts of the trip – the beach, the water park and for Alexis, the alligator place. Some liked the escape room best. The teens liked making dinner while they hung out at home. Kate says all trips are fun and says she enjoys the trips now that they’re older because she knows every year is one year closer to her not having them there anymore and wants to pack in the memories.
THE END!