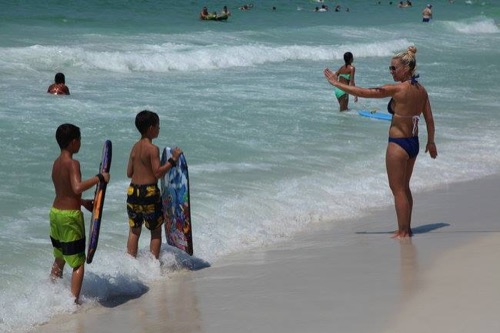 Tonight on TLC Kate Plus 8 returns with an all new Tuesday December 8, season 4 premiere called, “School’s Out!” and we have your recap below. On tonight’s episode the Gosselins head to Florida since it’s the end of the school year, to get some beach time, Kate Gosselin cooks the family a traditional Korean BBQ dinner.

Kate Gosselin has her hands full raising 15-year old twins Cara and Madelyn, not to mention her 11-year old sextuplets, Alexis, Hannah, Aaden, Collin, Leah and Joel, alongside trying to find love again as she goes back to the dating scene. This reality series follows the Gosselins through their crowded daily routines in southeastern Pennsylvania.

On tonight’s episode as per the TLC synopsis, “season 4 begins with the end of the school year and a trip to Florida. Also: Kate cooks a traditional Korean barbecue dinner and discusses the kids’ heritage. Maddie and Cara talk to teenage boys at the beach which might make Kate feel uncomfortable. “

Tonight’s episode is going to be filled with the usual Kate Plus 8 drama and you won’t want to miss it, so be sure to tune in for our live coverage of the show tonight at 9 PM EST! What kind of drama do you think will unfold in this fourth season of Kate Plus 8? How excited are you that Kate Plus 8 is back with an all new fourth season? While you’re waiting sound off in the comments below and tell us what your looking forward to most this season and from which Gosselin.

#KatePlus8 starts with Kate talking about how busy their summer is and says there are lots of projects then school. She tells the kids to start packing. She says they’re going South to Florida to the beach for vacation. Kate says beach living is easy.

Kate says they’re going to let the littler kids pack for themselves today. She says she has no control over what they wear but wants to approve what they put in the suitcase. We see Kate talking about spending her 40th in Mexico with the kids and says she couldn’t pack for them anymore.

Kate says they can each have a piece of luggage they’re in charge of packing and moving around. She says they are very excited about that. Kate pulls up the mega van and the younger kids go shopping with her for luggage. She says Joel woke up with a backache.

He was excited to get new luggage since he loves to travel but he’s sick today. She finds him a chair while they find luggage. He has a headache and upset stomach too but wanted to come along and pick out luggage. They find the right department and start picking out things.

Kate says if one kid comes down with something, all of them get it. She says she was hoping no one else would get it since they’re traveling. Mady and Cara talk about how they had their own suitcases by age three and matching strollers.

Kate says she was hoping they would each pick a different color. The producer asks why different colors matter and she says it makes it easier to find your stuff and staying organized. Kate says if she could, everything on the planet would come in six to eight colors.

The kids all beg for stuffed animal neck pillows. She says she usually doesn’t take them shopping and this is why. They get their suitcase and neck pillows and Kate piles it all into the van. She says now the kids go home and pack their stuff so she can inspect it.

Kate sends the kids to pack for the Florida trip. Lex underpacks and Cara says she just wears the same outfit over and over. Mady comes to help the girls choose what to pack. Kate says Mady can get Lex out of her fashion comfort zone.

Lex calls the clothing harsh and doesn’t like it but the others like it. Kate has to help the boys pack. Hannah took over Joel’s suitcase. Kate says they got them packed then she checks to make sure they had the right stuff. Kate says she has to choose her own battles.

Kate says they did a good job and now it’s travel day. Kate has a bus picking them and all their luggage up to go to the airport. Andrea is going along and so is Marley, Mady and Cara’s best friend. Kate tells the kids to get their luggage out to the bus.

They are going to the Emerald Coast, a family friendly area. The kids run to the plane and take their seats. They shoot footage from their own cams. The plane touches down late in Florida and they head to the house they rented.

Kate assigns room and the teenagers complain but are then happy that they get their own bathroom. Kate is exhausted and says tomorrow is the beach.

They get their stuff to head to the beach and says it’s a golf cart ride to the beach. They have two carts for the journey. The kids tell Kate to speed up. Kate freaks when she sees they have to cross a real road. They finally get there and the kids are ready to get into the water.

The kids are riding their boogie boards and Kate and Andrea are vigilant watching for the kids. The kids describe their wave boarding experience. Mady says she doesn’t like the beach and hates sand. They pack up after a couple of hours and go back for lunch.

Andrea points out to Kate that the teen girls are talking to some guys. Kate freaks out. Mady says some boys came over to ask what’s being filmed. They told them it was Kate Plus 8. She says it was nothing. Kate says Mady was flirting and doesn’t think she knew that’s what she was doing.

Kate is worried. Later, Kate takes the kids to an escape room place. The guy tells them to work together and they’ll give hints if they need it. Mady says they are not a team and Kate says she’s trying to instill in the kids that they’re a team.

The guy says find the bomb, find the code and enter the code to get out. The kids start and the guy says they found the first clue in a few minutes. Now they give them a hint since they seem to be stuck. Kate says Mady was yelling at her and took over.

Mady talks about how competitive her mom is and takes over. They are all freaking out and running around. They all yell at each other but finally find the bomb. The kids all agree their mom is freaking out. They are down to three minutes.

They get the last number with less than a minute to spare and then it all falls apart. They get one last hint and they get it with just two seconds to spare. Kate sits down exhausted. The owner says he’s amazed and they thought for sure they were going to blow up.

They pose for a winner’s photo – only 30% of people get out there. Kate says, losing is not an option. For dinner, Kate makes Korean barbecue for the kids. She says she wanted to do it on the trip because they usually do seafood and salad.

She says Jon’s family had always done it but she never had a recipe. The kids come and ask what it is. Mady offers help. She says it’s a crap shoot. The kids ask Kate about their background and she says they’re mutts.

Kate says the kids were talking about how Korean they are – she says their heritage is very important to her. They ask Kate what she is and she says just a mutt. Jon is half Korean and the kids are a quarter. She says he’s also half-Hawaiian.

She says she loves her kids and who they’re from even though she’s not married to their dad anymore. She says they’re beautiful because they’re her kids. She serves up the barbecue and the kids like it. Cara says she doesn’t eat meat but it looks good.

Andrea likes it and eats it up. Kate says she’ll make it again since they all like it and is surprised it all turned out well. She says it was a good day to hang and do fun stuff but says she has so much more planned for the kids.