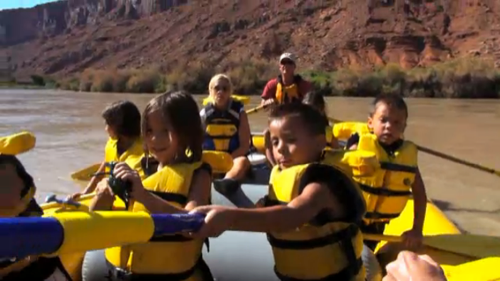 Tonight on TLC Kate Plus 8 continues with an all new Tuesday February 10, season 3 episode 5 called, “Kate’s Most Unforgettable Moments,” and we have your weekly recap below. On tonight’s episode we look back at the best of Kate and her family.

On tonight’s episode as per the TLC synopsis, “unforgettable moments of Kate’s life with her family are recalled.”

Tonight’s episode of Kate Plus 8 kicks off with Kate discussing how she copes with raising eight children on her own. She explains that “every moment has been hard.” They share an old clip of her when she and her eight children were all boarding a plane and the children were freaking out and crying hysterically – Kate had a meltdown herself and began sobbing on the plane.

The next memorable moment on tonight’s special Kate Plus 8 episode is Kate’s tummy tuck. In season 1 Kate showed off her tummy after having six children and calls it her “jowls of a dog.” Kate explains that it was the very beginning of reality TV, and she had no idea so many people were going to tune in and see her belly flab. Luckily, one of the fans of her TV show was a plastic surgeon in New York City, and they flew her out to get a tummy tuck.

Kate laughs that one of her family’s most memorable moments by far on TLC was the “most Asianest fight.” She decided to prepare an Asian meal for the kids and John, and they all sat down with chapsticks. The kids were starting to realize that they didn’t look anything like Kate, and they were Asian like their father. That night at dinner they all go in to a screaming fight over which one of them was the “most Asian.”

Now it is time for Kate Plus 8 viewers’ questions. The first question is, “What was your favorite trip and the favorite part of that trip.” Kate says that hands down their favorite family trip was to Australia and New Zealand. The kids still ask constantly to go back to Australia, their whole family is very animal-oriented. Kate’s favorite part of going to Australia was getting to hug a koala bear. The most memorable moment for Kate was when she took Maddie and Cara sky-diving when they were 10 years old. Kate laughs that she was insane, and she can’t believe she ever let her kids do that.

The next viewer question is, “Do you plan on dating again, or are you happy being single?” Kate laughs that she doesn’t have time to date anyone. She would love to have a chance to get out and meet new people, but unless the man of her dreams walks in to her kitchen or she meets him at the grocery store.

The next memorable moment of Kate Plus 8 is when the family moved from their old home in to a bigger house. Soon after they moved in to their new house they got two German Shepard puppies, Nala and Shoka. When Kate and John got divorced, Kate sent the two dogs back to the breeders because their lives were in complete chaos. Once everything settled down, Kate went and got one of the dogs back for the kids – and they were thrilled.

Kate explains how hard it was leading up to their divorce. They share a clip from 2009 when Kate was stuck taking all eight children to the party store to get supplies for their 5th birthday party, because John needed to “take the weekend off.” Kate hopes that they would be able to work through their issues, but the divorce rate for parents of multiples is ridiculously high. On the bright side, Kate thinks that the divorce helped her become closer to her kids.

The next memorable moment for Kate and her family is when they travelled to Hawaii and Leah learned to swim. She was so proud of Leah because she was so “teeny and tiny.” Their trip to Hawaii was easily comparable to their trip to Alaska – and Kate embarrassed the kids by “talking whale” while they were whale watching. The kids were mesmerized with the whales “blowing their holes.”