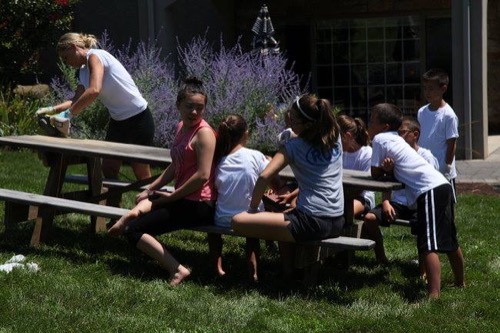 Tonight on TLC Kate Plus 8 returns with an all new Tuesday December 29, season 4 episode 4 called, “Green Thumb Gosselins,” and we have your recap below. On tonight’s episode the Gosselins do landscaping as one their summer projects.

On the last episode, Kate took Mady antiquing to find some deals on vintage items. Meanwhile, the family took a trip to the Land of Little Horses in Gettysburg, Pa.; and Kate judged the kids’ cooking competition. Did you watch the last episode? If you missed it, we have a full and detailed recap right here for you.

On tonight’s episode as per the TLC synopsis, “the Gosselins do landscaping as one their summer projects, but they also take time for lemonade, yoga and an unexpected burial.”

Tonight’s episode is going to be filled with the usual Kate Plus 8 drama and you won’t want to miss it, so be sure to tune in for our live coverage of the show tonight at 9 PM EST! What kind of drama do you think will unfold in this fourth season of Kate Plus 8? How excited are you that Kate Plus 8 is back with an all new fourth season? While you’re waiting for tonight’s episode, sound off in the comments below and tell us what you’re looking forward to most this season and from which Gosselin.

#KatePlus8 tonight features Kate making the kids do a landscaping project. The show starts with a dead fish burial. They had another die and had been saving other dead fish in the freezer to do a mass burial.

Kate says this is not their first fish funeral and they count off all the dead fish they’ve gone through. Kate tells the kids to get them in the hole now or it’s over. She says a quick prayer and covers it with dirt.

Kate says she’s been wanting to do the front landscaping since they moved in at that house. She meets with Eddie, a landscape architect. She wants all the stone gone and the yard changed. She wants the kids to help so they can save money.

Eddie advises they can use the stones on the road to the chicken coop. She bribes the kids by offering to let them drive the Gator to move the rocks. Cara and Mady are sleeping in and miss out on this. Kate is stunned by how much the boys are eating.

She says Aaden is tiny but he eats so much. Kate is optimistic about the kids helping. She says they usually argue with her over stuff. Kate says the kids realized quickly how hard the work is and they start asking for a break.

Kate says when she grew up, she had to work every weekend on projects like this. Mady says Alexis works the least every time. Mady says she cries and throws fits to avoid it. The boys think the girls are working least and complain a lot.

They load up the Gator. Kate decides that Joel gets to drive down and Leah can drive back. Joel gets behind the wheel and takes them down the driveway. She says she doesn’t usually let the kids drive it because it’s not a toy.

She says they’ve only gotten to drive it a few times. Kate is on trip number three and realizes they hadn’t made a dent in all the stones. She says the landscaping crew has to finish this up for them. The boys are interested in using the chain saw.

She has one of Eddie’s guys teach her how to use the chain saw. Kate is afraid of it despite all the safety equipment. The kids yell at her that she can’t even skate and shouldn’t mess with it. She says she tries to do things to show the kids they shouldn’t be afraid of life.

Kate gets scared when the chainsaw weighs so much but she’s committed to doing this to impress her sons. Mady says there’s a small area protected by trees that they call their secret hide out. The kids are upset because she’s going to chop down a tree in the hideout area.

The girl says the show should be called Kate plus Kate because their mom is the one who gets to do everything. Kate starts using the chainsaw and says it’s a lot of fun. Kate next loads the kids up to go to the garden center to look at plants.

Mady and Cara sleep in because they are completely uninterested. Alexis is the only kid happy to be on this errand. Eddie meets them and shows them the plants they will look at today. Kate says she loves beautiful plants but doesn’t know anything about them.

Hannah wants to go home and sleep after 10 minutes. The kids are bored and want to go back to the car. They go sit in the shade. Eddie shows them a plant calls Lamb’s Ears. They are so soft and that gets the kids interested in the project.

Eddie adds them to the plan but tells the kids they should plant them. Kate lets each kid get one Lamb’s Ear plant each to put into the landscaping. Kate makes dinner for a family barbecue and swim but then it looks like rain is coming.

The boys talk about how they don’t like cooking and Kate talks about how much she likes to grill but says the grill is so far from the kitchen. She talks about how as the kids get older and more capable, they are less willing to help.

Kate is not happy as the rain picks up and the kids ask to run around in the rain in their bathing suits. They do that and are happy. Kate says they think that it’s the greatest thing ever. The rain slows and Kate throws the food on the grill.

Andrea is with them for the summer to help out and be a second Kate. Kate says it was wet, windy, delicious and fun. The rain stops and the kids finally get to swim.

Next Kate has the kids doing yoga. She brings in Lisa, her yoga teacher, and says she always finds it relaxing. The dog decides to come get in the middle of it. Kate says the kids are goofing around instead of stretching.

Lisa then starts them on handstands. The kids can all do it and are happy. Kate says they all ended up invested in it and really participating. They finish the yoga session and the kids want to go swim. Kate is exhausted.

Now it’s back to the landscaping project. The stones and old shrubs and plants are gone. Kate says the kids have wanted to do a lemonade stand but they live too far off the road. So they make a lemonade stand for the workers and all the signs say free.

Kate has everything ready before lunch and she finds a big wasp nest under the house. She sprays it and runs off creeped out. The kids are laughing at her and then she drops her phone and cracks it. Kate says she’s an idiot.

Kate says she panics when something happens to her phone and is irritated. Eddie has his wife Lori come over to help plant with the kids. Kate wants to rearrange before they dig. Alexis finds a snail and is immediately distracted.

She wants to keep the snail. Kate says she’s going to get her snails for Christmas. Kelly, another landscaper, also helps the kids. Kate is happy because the ladies are in teacher mode and are explaining to the kids why they do things and how.

The kids tell Lori the landscaper that Kate destroyed the secret hideout by cutting down trees. Kate is very excited about the project and then offers the landscapers the lunch they prepared. Lori says they usually don’t get lunch from their clients.

The next day is mulch around all the new plants. Kate is happy that the kids are helping so much and learning a lot. Next they shovel it in and load it in the wheelbarrows. Lori lets them get in the truck and use a pitchfork to unload the mulch.

Lori tells the kids to give Chilo, the big landscaper a ride since he have them rides. The kids all chip in and push him around. When it’s done, Kate’s kids hug them all. The next day, Kate has a surprise for the kids.

There are boxes for each of them. She gives them the presents and has them open at the same time. She ordered them garden stones to sit on in the garden. Each has their name and a symbol. The kids really like it. Mady and Cara complain about theirs.

Kate made theirs kind of a joke but they are upset at it. Mady wants to send hers back and change it. She also made one for Shoka the dog and Zorro the bird. Cara and Mady refuse to put their stones in there.

They are upset that she put a joke on their stones that they made with Marley three months ago and don’t make anymore. Kate also has a stone for herself. She says she can’t win with the teenagers. She reminds them that it’s in her house forever.

Mady and Cara say it’s not funny since it’s from when they were 12. She also has a stake for them for their Lamb’s Ear with each kids name on it so they know which plant is each kids’. Kate says the project was worth it and she’s happy with the results.

The girls say they liked to be involved in the planting. Mady says the house is so pretty and Cara says she doesn’t think anything. Then Cara refuses to talk anymore and tells Mady to stop being stupid.