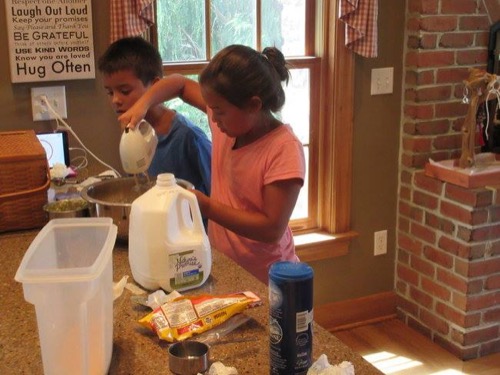 Tonight on TLC Kate Plus 8 returns with an all new Tuesday December 22, season 4 episode 3 called, “What’s Old Is New.” and we have your recap below. On tonight’s episode Kate Gosselin takes Mady antiquing to find some deals on vintage items.

On the last episode, the gang was still in Florida, where some of the kids went deep-sea fishing, but their adventure was cut short by seasickness. Later, Mady and Cara looked up recipes to cook the family dinner; and the kids had fun on their first trip to a water park. Did you watch the last episode? If you missed it, we have a full and detailed recap right here for you.

On tonight’s episode as per the TLC synopsis, “Kate takes Mady antiquing to find some deals on vintage items. Meanwhile, the family takes a trip to the Land of Little Horses in Gettysburg, Pa.; and Kate judges the kids’ cooking competition.”

Tonight’s episode is going to be filled with the usual Kate Plus 8 drama and you won’t want to miss it, so be sure to tune in for our live coverage of the show tonight at 9 PM EST! What kind of drama do you think will unfold in this fourth season of Kate Plus 8? How excited are you that Kate Plus 8 is back with an all new fourth season? While you’re waiting for tonight’s episode, sound off in the comments below and tell us what your looking forward to most this season and from which Gosselin.

#KatePlus8 starts with Kate taking Mady out antiquing. Kate says she’s clueless about antiques. Kate says Mady is always rearranging her room. Kate wants to show Cara’s room but it’s a mess. She goes to clean up. Cara says she has no style and doesn’t care.

Deanna comes to go with Kate to take Mady antique shopping and Cara is along for the ride. Mady says she likes Deanna and asked her to adopt her once. They stop at one shop and look at an old Victrola. Kate says Mady has a unique personality and she likes her exploring who she is.

Mady spots a 70s era radio that she likes. They head to another shop. Kate says seeing stuff she had in her house as a kid made her feel old. Mady finds a Boy Scout camera she likes and some vinyl records. They head out to one last place- an antique mall.

Kate is icked out when she finds an antique autopsy table. Kate is icked out. The girls complain about Kate constantly making dating jokes and Mady says she wants her to get remarried so she’ll stop making dumb jokes.

Mady says Deanna is good for opinions for Kate only for mom stuff. Kate says she enjoyed it more than she thought she would. She says Cara had glazed over eyes and is happy that Deanna went along to help them. She says it was a fund day.

Kate talks about the two metal tables that Mady bought and she needs to repaint them and Mady gets Aaden to help her. They take them into the yard and put them on a tarp to paint them. Mady tells Kate to go away and let her paint them.

Kate goes. Mady says Aaden helped but in a cute way that 11 year olds help. He asks why she has two and she says she has two sides of her bed. Aaden says he doesn’t even have a bedside table. She explains how much storage she has.

They dust them off. Then they start spray painting them gray and then does the insides of the drawers red. Aaden drops grass on the wet paint and Mady yells at him. Kate comes out later with drinks. Mady says Aaden just kept asking to go inside. Mady says she’s happy that they turned out nice.

Kate is taking the kids to Land of Little Horses today. She says she’s seen the signs but they’ve never gone. She says she avoided it for a while because her kids and maybe she would like a little horse. Kate says she did research on an indoor pony.

They have a dog, chickens, fish and a bird and are talking about what they next pet might be. The girls want a cat and the boys a puppy. They see Trevor a tiny donkey. They then go inside to love on some horses. Hannah is braiding one of the horse’s hair.

Mady points out that the donkey is the same age as Kate. Kate talks to a family who has an 11 year old girl. She says they already have one. Kate finds out that you can’t leave the horse outside all day or they’ll overeat and get foot issues.

Kate says her dream of owning a tiny horse is now gone. Joel says you can’t say aww at a mini horse and be a manly man. Aaden says you can love any creature. Next they go to the horse show and it’s like a little circus arena.

They have some dogs jumping through hoops then a goat on a barrel. Then there’s the horses waving their hooves. Kate says it was cute until the math show. There’s a horse that did math. Kate says she thought it was a set up until they call down Alexis.

There’s a 9 on her shirt and the horse looked at it and then counted to nine. Kate says her mind is blown. Kate talks about the other animals like a llama with huge eyes and then we see the kids hugging baby goats. Mady says it was a great day.

They all wash off then leave. Kate says it was a great day and better than she expected it to be. Next is Kate doing a cooking basket surprise challenge for the kids. She says they’ll have just 60 minutes to cook. Kate says she got the idea late one night to do a cooking challenge and the kids were all excited. Mady and Cara are the team leaders.

Kate says she got the idea late one night to do a cooking challenge and the kids were all excited. Mady and Cara are the team leaders. Kate says she’s not a mom who tells her kids that everyone is a winner and says you have to work hard to be first place so she’s not a fan of that approach.

She says she gets beat up about it, but says it doesn’t do your kids any favors.Andrea is there and she and Kate are judging but are kicked out of the kitchen. Mady says when you watch this show, you only see Kate an hour at a time, but they deal with her every single day.

Cara says she thinks their mom was just tricking them into making her lunch. The younger kids talking about Cara being cooler than Mady because she’s quiet and sits back while Mady is bossier. Mady tells at the kids she’s in charge of. The girls says that Mady can be bossy and doesn’t let them do anything.

Mady says she likes to be in charge and she’s not mean but they’re the first born and that’s just the way it is. Cara is using some things not in the basket. There’s eight minutes gone in the challenge. The boys talk about how they don’t even know where things are in the kitchen.

Cara says she didn’t assign the kids things to do but Mady did. Joel says he made guacamole. Kate comes and tells then there’s 16 minutes left and they scream at her to get out. Kate is happy because she has time to clean while they’re all in the kitchen.

Kate says she’s a little worried about tasting their creations. Andrea and Kate sit to sample the dishes. First is a salad on a tortilla bed by Cara’s team. Kate says she’s blown away. Andrea says it looks amazing.

Kate digs in and tastes and says wow. She says the flavor is amazing and the guac is delicious and says she had no idea they could get this from the list of things she randomly chose. Then Mady gives them tortilla chips with sesame oil and made tuna salad with sesame seeds.

It’s like a dip. Kate tastes and says it’s delicious. She says she can taste the oil and says the tuna is light and it’s good. She says it lacks some garnish but the red plate made it look good. Kate says after round one, they’re tied.

Kate wonders why the kids aren’t making dinner more often. Round two is a dessert competition. For the dessert, Kate says they can use what they want and she gives them 60 more minutes. Mady came running in and asks if she can throw it away and restart.

Mady says it’s disgusting and she read it wrong but throws it all out. Kate says the baking is complete then she and Andrea were called back in to judge desserts. First Mady serves hers with coffee and it’s a giant cookie.

They asked what’s in it and she just says eat it and then I’ll tell you more. Kate tastes and points out the ingredients. They are avocado chocolate chip cookies. Kate says it didn’t look appetizing but tasted good.

Cara serves chocolate peanut butter cupcakes and says it’s because they were tired and bored and done with this. Kate asks for a dish of this and says it’s good. Kate says she liked both rounds of stuff. Kate and Andrea go to score the event.

Kate and Andrea decide to announce who won then run away fast. Kate says no mutiny when she announces it. She says it was Mady’s team. She says Mady’s perseverance to throw out the batch and try again.

Cara says her food was better but Mady’s food was more creative. Mady says she knows she won out of sympathy. Then the kids all go lie around tired. Kate says this is a time when it’s fun to be in a large family because you can break into teams.