BY Victoria Laza on October 4, 2015 | Comments: one comment
Related : Keeping Up With The Kardashians, Reality TV, Recap, Television, TV 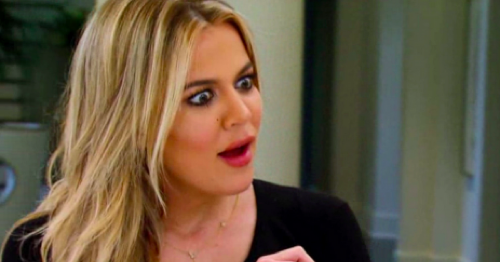 Keeping Up With The Kardashians continues tonight with an all new Sunday, October 4 season 10 episode 16, called “Vanity Unfair” and we have your weekly recap below. On tonight’s episode, Kim Kardashian works to smooth things over after Caitlyn Jenner’s Vanity Fair cover story comes out and causes hurtful feelings among some family members.

On the last episode, Kanye staged a surprise concert in Armenia; Kim arranges a special stop in Jerusalem to have North baptized in Israel’s oldest Armenian church; and in Los Angeles, Kris had difficulty adjusting to having Caitlyn in her life.  Did you watch last week’s episode? If you missed it, we have a full and detailed recap right here for you.

On tonight’s episode per the E! synopsis “Kim works to smooth things over after Caitlyn’s Vanity Fair cover story comes out and causes hurtful feelings among some family members; and Khloé considers how much emotional support she can afford to give Lamar.”

Kim is in San Francisco to work on her video game, and asks Caitlyn if she wants to be a character in the game. She says she’ll think about it.

Kim tells Khloe that she went to Caitlyn’s Vanity Fair photoshoot, saying she looked beautiful. Khloe refers to Caitlyn as “him” and Kim corrects her. She says she asked at the shoot what she should call her father, and decided to go with female pronouns.

Khloe receives a call on the cell phone from Lamar, which Kim side eyes because she is talking to him a lot lately. In confessional, Kim says she is concerned about Khloe talking to Lamar after he hurt her. She says it makes her sick to her stomach.

When Khloe gets off the phone, Kim says she can’t take the way Khloe starts flirting with Lamar when he decides to come around. Kim says that Khloe would be acting differently if it were French calling her, and Khloe says they can’t be compared because she was married to one and dated the other.

Kim asks Scott if he wants to be in her mobile game, and he agrees to it. She then tells him and Kourtney about Lamar and Khloe flirting on the phone. Kourtney says Khloe always wonders if she ended things too quickly.

Kim says in confessional that she thinks Khloe can’t move on with her life as long as Lamar is around.

She tells Scott and Kourtney that luckily Lamar can’t get any of Khloe’s money.

Khloe goes to Vegas to make an appearance at the nightclub 1OAK. On her jet on the way there, she tells her friends that she has talked to Lamar and he lives in Las Vegas.

Kim does an appearance in Nashville despite being sick, saying in confessional that she doesn’t cancel her engagements because it isn’t fair to all of the people who put work into it.

At the event, everyone asks her questions about Caitlyn, whose Vanity Fair cover just came out. She says in confessional that she had asked everyone not to ask about that. She says that the last thing she wants to do is derail what she came there to do, and she just wants to get in and get out.

Kim and Kris are upset that Caitlyn dragged her in the Vanity Fair article.
“He can go fuck himself,” Kris says on the phone to her daughter. “I honestly wish I never met this man.”

Kim tells her that she is annoyed for her that she wasted time with her relationship with Bruce over the years.

Khloe spots Lamar at the club, and goes back to her hotel room to hang out with her friends there instead.

Scott talks to Kourtney about the possibility of him being in Kim’s game. He says he would want to receive residuals instead of a one-time payment, asking why he would continue to promote it over time if he weren’t getting paid. Kourtney decides not to be involved in the deal at all and let him talk to Kim about it.

Kim says she doesn’t think Caitlyn thinks she has done anything wrong. She says she is definitely going to talk to her to tell her the things she’s been saying aren’t appropriate and that she needs to leave Kris alone.

Khloe tells Kim and Kourtney that Caitlyn has asked her to call her Bruce.

Kim tells her about Caitlyn being honored with the Arthur Ashe award, and going to the ceremony.
Khloe says she isn’t going because she isn’t going to reward bad behavior – referring to Caitlyn’s interview.

At dinner with Kris and Khloe, Kim asks Khloe if she has been talking to Lamar. Khloe remains silent on the subject, but Kris says she has been texting him.

Kim says that’s “weird,” and Kris asks how it’s weird, saying she’s always been supportive. Kim brings up the hurt that Lamar has caused her sister, and Kris tells her that she doesn’t think it’s best to judge Khloe’s heart.

Khloe asks Kim if she ever asked her how she felt, saying she believed that she wanted to be married to Lamar. She says she will always love him.

Khloe gets a phone call from Lamar, who tells her that his best friend has died suddenly of a heroin overdose.

Kim and a guy from Glu games meet up with Scott to discuss his possible appearance in her game, which she says in confessional that she is nervous about because he is always trying to get a side deal.

Scott tells them his ideas from the game before saying that Kim’s sisters felt left out of the game due to the usage of their brands in the game while it revolves around Kim and she gets everything from it. Scott says that he wants a finder’s fee and equity.

Kim goes to Caitlyn’s house in Malibu and tells her everyone’s complaints about the Vanity Fair article. Kim says that Khloe sees Kris upset and gets defensive. Caitlyn says that Khloe doesn’t know the full story, and Kim says that’s what kids do. Kim calls out Caitlyn for calling Kendall and Kylie “distractions” and saying that if Kris had been accepting of who she was, they would still be together.

“It sounded like she beat the shit out of you,” Kim says, telling Caitlyn she should have shown more respect.

“I can see where you’re trying to go there,” Caitlyn says. “Don’t go there.”

“You’ve got the fame, but you’re losing your family,” Kim says.

Kim tells her that this is her time but she doesn’t need to bash people.

Caitlyn says she wants nothing but good from this, and tried to be as honest as she could about how she felt. She says she never once tried to do anything to hurt Kris. She says she doesn’t like that everyone is taking this the wrong way and is tense.

Kim says she just needs to mend everything so everyone can move on.

Caitlyn says she can’t apologize unless they come out there to see her, saying no one has come out and she feels so isolated. She says all of a sudden there’s a wall.

Kim tells her that she just needs to get the family unity going again.

Caitlyn says she just wants everyone to be happy, she loves her kids and wishes they were there every damn day.

Kim tells Khloe and Scott about her conversation with Caitlyn. She says Caitlyn doesn’t seem like she’s really listening.

Khloe says she can’t go over there and they have a new feud because she won’t apologize to her mom.

Kim says she doesn’t think that there was anything wrong in the article.

Scott says the only thing Caitlyn cares about is that her Twitter followers went up more than Obama in one day. He then goes on to say that everyone is paying attention to Caitlyn because “the best athlete in the world turned into a woman.”

Kris tells Kim that she thinks she is going to leave town for a little bit because she’s having a really tough time. She says after reading the Vanity Fair article she is just so disappointed and needs to get away from the negative energy. Kris says in confessional that she didn’t realize how the article would affect her.

Tearing up, she tells Kim that she thinks it would be healthy to go clear her head.

Kim says she thinks that’s the best thing she can do. She says in confessional that she’s happy her mom is going out of town and doing something for herself, and that going away will help Kris with the healing process.