BY Kristine Francis on April 19, 2015 | Comments: one comment
Related : Keeping Up With The Kardashians, Reality TV, Recap, Television, TV 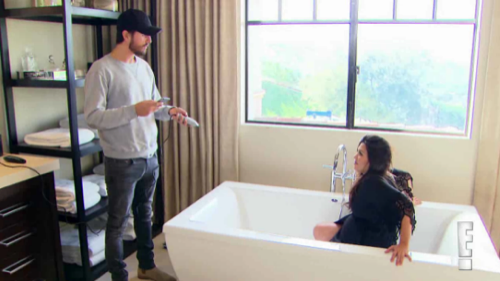 Keeping Up With The Kardashians continues tonight an all new Sunday, April 19 season 10 episode 6, called “Don’t Panic!,” and we have your weekly recap below. On tonight’s episode, Kris becomes fed up with Scott when he brokers a Vegas nightclub appearance for her birthday, then shows up to it wasted and belligerent.

On the last episode, when Khloé closed the book on her relationship with French Montana, Malika got caught in the crossfire; Kris dragged Kylie on a mother-daughter bonding trip to San Diego; and Kim spoke at a Silicon Valley tech conference to prove to the haters that her entrepreneurial skills extended beyond the world of beauty and fashion. Did you watch last week’s episode? If you missed it, we have a full and detailed recap right here for you.

On tonight’s episode per say the E! synopsis “Kris becomes fed up with Scott when he brokers a Vegas nightclub appearance for her birthday, then shows up to it wasted and belligerent. Meanwhile, Kim resorts to spy tactics to solve a theft problem at Dash New York; and pregnant Kourtney bares all for a nude photo shoot.”

It doesn’t happen often but sometimes Kourtney can genuinely shock Scott. Typically the jaded East-Coaster has seen it all and done it all but when his heavily pregnant girlfriend told him she was going to be doing a naked photo-shoot – he was shocked. And then admittedly he was a little unnerved. Apparently his zen girlfriend doesn’t shave as she normally would have (particularly during this late time into her pregnancy) and so after a while he did eventually find it funny that the photographer was going to have to edit pretty much the whole photo.

Kourtney’s reasoning for going au natural was simple. If she couldn’t reach or see it then it didn’t matter actually mattered what it look like .However, things are going to be different with the photo-shoot. So after one too many jokes, Kourtney realized she needed to at least get things into shape.

Hence she shaved prior to the photo-shoot and because she couldn’t reach a certain area of herself – she turned to Scott for help. And luckily for her, he hooked her up by giving her a good bikini trim. But according to the family, that’s were they think Scott’s helpfulness ends. Because once they found out he had also talked their mom Kris into hosting an event – most of the girls were left apprehensive.

The whole Las Vegas hosting thing didn’t sound their like mother and as it turns out it wasn’t their mother. Kris had just agreed to do it because Scott had somehow convinced her it was a good idea. Yet no one else finds it to be a good idea and so Kim went to her mother to talk her out of it.

And, sadly, that resulted in Kris wanting to back out.

Though the word sadly is used because by time Kris did voice some concerns – it was too late for her to back out. Promoters had already brought up billboard space and they have been using her name for weeks. So in the business sense, to back out, was to screw both hers and Scott’s reputation.

After all, he was the one that had gotten Kris her deal for her birthday and essentially it was going to be on him to repay all the promotion that would have been wasted on Kris. So he told Kris to imagine if she was in her position and once she was thinking about business –how it would feel if one her talents did that to her – she knew she couldn’t back out of the club appearance. Thus she ended up agreeing to do an event that she really didn’t feel all that comfortable with.

And thankfully Kim wasn’t around to rake her over the coals for that.

There was a crisis in the DASH New York store. It seems the DASH dolls haven’t been doing a good job in stopping thief so Kim was asked to go check it out. But after she got there, she saw that the situation was actually much worse off than she originally thought.

Kim, you see, had decided that she needed a clear picture of how bad things have really gotten. So she hired Jonathan’s security friend Sal to go into the store and casually take an estimate of things and even pick up a few objects with his five finger discount. And what she saw, from the many security cameras, is that the DASH Dolls basically let him do whatever he wanted in the store after his odd behavior drove them all off.

So on one hand Kim understood why the girls had given him such a wide berth. Back when she was in retail, if a guy came off as too strong then she would have given him space as well. But on the other hand she never would have so completely overlooked him that he would have been able to steal from the store while he was literally right behind her.

And that’s not all the dolls did wrong. Because Kim also sent in a female thief the second time around and Sal’s friend managed to walk right out of the store wearing DASH merchandise without being stopped once! So it wasn’t the clientele that was at fault here – it was the dolls. These same people that sisters had hired – weren’t doing the jobs they were paid for.

Hence Kim had a little chat with that and now that they know she’s been secretly watching them – watch as they finally get their jobs right.

Meanwhile, over in Vegas, Kris’s misgivings about her birthday event did seem to all come true. Subsequently, one of Kris’s greatest fears about doing in her party in Vegas was that it would be used by Scott as an excuse to go off and do whatever he liked. And that’s exactly what happened. Scott showed up at her birthday dinner, right before the event, wasted. So, believing she still had time, Kris tried to get him to eat something to diffuse the alcohol. Yet, ultimately, she couldn’t force him to sober up and the night only went downhill from there.

Unfortunately one of the ugliest things about Scott is that when he does drinks, he doesn’t know how to stop or when to begin calming down. So, for the rest of her night, Kris tried to keep an eye on Scott. And what did she get for her troubles? She got sprayed with champagne and was also hit in the head by the bottle.

But despite that, Kris still blamed herself for what Scott became. She felt like she shouldn’t have put Scott in such a position. And at the very chance she got – she apologized to Kourtney. Yet Kourtney didn’t need it.

She knows that Scott is the only one to blame and she feels fed up.