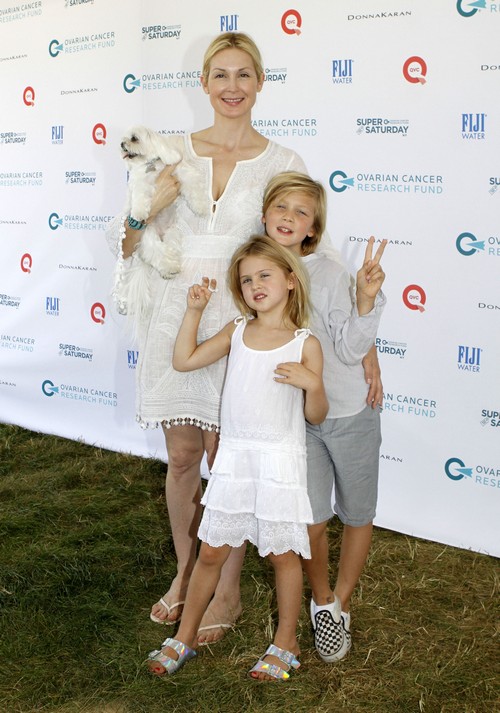 It may seem like a miscarriage of justice that Kelly Rutherford’s kids Hermes and Helena were given to her ex Daniel Giersch, but was it really? According to OK Magazine, there is much more going on and Kelly’s statements to the press are all whitewash and hogwash. In fact, it looks like Kelly Rutherford’s shady antics may have caused her to lose custody of her kids in the first place and this whole travesty could have been avoided.

According to a litany of reports over the years, Kelly Rutherford has gone out of her way to try and keep Daniel Giersch away from their children and has engaged in a campaign of harassment against her ex-husband. Her attacks on Giersch were so intense that the judge in their custody case took note and that’s why Daniel Giersch was given residential parent status. If Kelly Rutherford had been reasonable, no doubt a civil visitation arrangement could have been managed.

But when Kelly allowed her hate of her ex-hubby to override her love of her children, she cost herself dearly. You may wonder what she did that caught the judge’s eye and lost her primary custody. Well, for starters, Kelly Rutherford refused to put Daniel Giersch’s name on their daughter Helena’s birth certificate as the father. She continued to refuse even after she was instructed by the divorce and custody court to do so.

Kelly Rutherford was also rumored to be behind accusations that Daniel was an arms dealer – these accusations have never been proven. But those unproven allegations meant, under US law, that Daniel Giersch’s Visa was revoked despite no charges being filed and no evidence to substantiate the claims. Because his Visa was revoked, native German Giersch had to move back to Europe and the court sent the kids with him. Kelly was allegedly trying to get him booted so she could have the kids to herself.

The judge in their case – a woman, by the way – said, “Even while under the scrutiny of an extended trial, Kelly still has declined to demonstrate the level of commitment to facilitating the relationship that would be required of a residential parent in a relocation situation.” Translation? Kelly Rutherford, according to the court, was being a deplorable person and continued to deny Daniel access to their kids – so she was found by the court to be an unfit primary custodian.

Daniel Giersch was ordered to pay for Kelly Rutherford’s travel to Monaco, where he has been residing, six times a year. He has to cover her airfare and lodging, so Kelly crying that she can’t afford to see her kids does not hold water. She’s not the one footing the bill, despite her public statements to the contrary. Kelly also says that she discusses the custody battle with her kids and, rumor has it, she’s saying horrible things about Daniel to Hermes and Helena. That’s just awful.

And despite the custody deal in place – ordered by a US court – Kelly Rutherford was able to swing getting her kids to the US for a visit. But she couldn’t just say thanks to this gift – she tried to keep the kids. Kelly said that her kids told her “alarming” things about their father that prompted her to try and keep them, against court orders. But can you believe this woman who has been accused of such dirty shenanigans before?

Granted most courts will give the mom sole custody of her kids. But when they don’t, it’s a strong statement that something questionable is going on – and that seems to be the case with Kelly Rutherford. She’s playing on all our sympathies but, in reality, Daniel Giersch may be the better parent and that’s just too bad for Kelly. Healthy co-parenting is essential to emotionally healthy kids after a split. Just because the kids are US citizens and their father is not does not mean Kelly has more rights.

It’s clear that if Kelly is handed primary custody of her kids, she won’t let Giersch see them and that’s not okay. Plus – if she’s so committed to being with her kids, why doesn’t Kelly Rutherford move to France? They do have film and TV work there for Americans. And it’s not like her IMDB activity of late is bursting at the seams… She’s barely working. So why doesn’t Kelly go to France and barely work there? Xoxo Gossip Girl!

Kelly Rutherford and her kids by FameFlynet