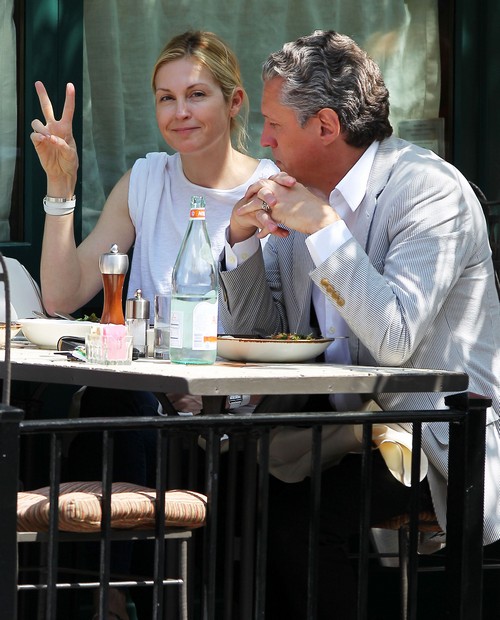 After several setbacks and an incredibly heated custody battle, actress Kelly Rutherford was finally reunited with her children in New York City on Friday, July 3. Kelly and her two children, Helena, 6, and Hermes, 8, will be together at last, and get to spend the Fourth of July weekend together. Rutherford greeted Helena and Hermes with her new boyfriend, Tony Brand, who is the Assistant Manager of Gucci.

On June 22, a Monaco judge ordered that both Helena and Hermes spend the summer with their mother Kelly Rutherford in the United States. Prior to this ruling, Rutherford, 46, was spending much of her time traveling back and forth between Monaco and the United States to see her children, who were living with Rutherford’s ex-husband Daniel Giersch, since 2012.

The ruling, while being a great victory for Kelly Rutherford and her children, is just a minor victory at that. The custody battle continues to become more and more heated and after Helena and Hermes spend the summer with their mother, Kelly Rutherford has to bring her children back to Monaco to live with Daniel Giersch.

Kelly Rutherford and her ex-husband Daniel Giersch, a German businessman, divorced in 2009. The couple has joint custody of Helena and Hermes since 2012, which is when Giersch decided to move to Europe with Helena and Hermes, after Giersch’s U.S. visa was revoked.

We hope that Kelly Rutherford can enjoy this holiday with her children, and create many memories during this summer, however, as we mentioned earlier, this custody battle is far from over and we are sure things will get a lot worse before they start to get better.