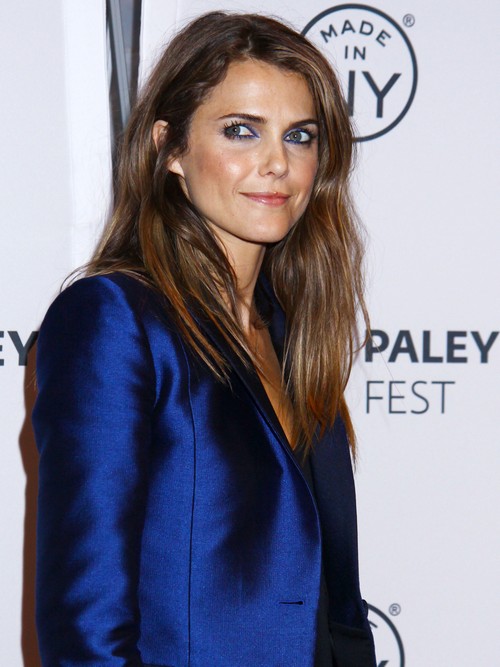 Matthew Rhys and Keri Russell are keeping a secret – “The Americans” co-stars are engaged. It’s not quite a done deal yet – Keri’s divorce from Shane Deary isn’t final – and until the couple signs the paperwork that ends their marriage everything, including an engagement, is completely unofficial.

Things have been moving fairly quickly for the co-stars – Matthew moved in with Keri and her children sometime at the beginning of the summer. And now a source has revealed to Star, “Matthew asked Keri to marry him. However, it wasn’t an immediate yes. She agreed to an unofficial engagement which made sense since Matthew and Keri are such private people.”

But there is the matter of Keri Russell’s divorce from Shane Deary – they separated in the summer of 2013 after seven years of marriage. The couple has two children, eight-year-old River and three-year-old Willa. Just a few weeks after Keri and Shane announced they were divorcing rumors started that co-star Matthew Rhys had stepped in as the man in Kerri’s life. There have been a few accounts stating that Keri’s co-star is the reason her marriage to Deary ended.

When rumors got out that Matthew Rhys and Keri Russell were dating the actor’s mother would call him up and ask “What’s going on? I just read about you.” At the time Matthew kept his romance a secret from his own mother, telling her “You have to turn off your Google alerts.” Will he keep his engagement a secret from his mother too?

In regards to any engagement news an insider says, “Everybody assumed they would have kept the news a secret until after they ran off to the courthouse, but Matthew’s so happy he’s having a hard time not telling just about everyone.”

If Rhys is trying to keep his romance with Russell private he’s not doing a very good job of it. The couple was spotted out together earlier this month as they rode their bicycles around a Brooklyn, New York neighborhood, stopped for a beverage and appeared to share a few intimate moments.

Neither Keri Russell nor Matthew Rhys is going to say much about their relationship, living arrangements or engagement anytime soon. She needs to put a legal end to her marriage to Deary before she can make any public acknowledgement that she is romantically involved with her “The Americans” co-star.