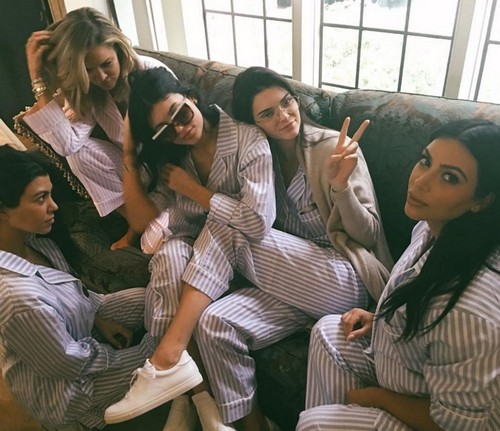 According to reports, it was only at Lamar Odom’s insistence that Khloe leave his bedside and go to Kim’s baby shower.

Kim’s baby shower had a “Troop Beverly Hills” theme and everyone who attended wore blue and white striped pajamas. They even had little teepees set up inside the Beverly Hills home where the Kardashian and Jenner sisters were photographed sipping tea and cramming close together on a couch for photo ops.

Stepping out to attend Kim Kardashian’s baby shower is the first time Khloe has left Lamar Odom’s side since October 13. Khloe rushed to Nevada to be by her estranged husband’s side as soon as she found out he was in critical condition.

Khloe Kardashian did miss Kim’s 35th birthday party. It was a movie theater surprise party planned by Kanye West. Even though Kim posted that all of her family and friends were in attendance but we know that’s not true.

As a matter of fact, it was reported that Khloe Kardashian was pretty angry at her older sister and her brother in law for going ahead with the party. Khloe thought that the surprise party should have been cancelled in the wake of Lamar’s medical crisis.

Apparently it wasn’t good enough that the entire Kardashian/Jenner family stopped all their social media for an entire week when Lamar Odom was at his worst. Kim Kardashian even canceled her original baby shower so today’s party was actually a makeup party.

It looks like the Kardashian sisters were able to squash their beef though because Khloe did end up going to Kim’s baby shower but to be honest, Khloe didn’t look like she was having a good time at all. In one of the photos, all of the Kardashian and Jenner sisters were sitting on or around a floral couch. Khloe is sitting on the end with her head down so no one can see her face.

We know that Khloe has been taking care of herself because new pictures of a shorter haircut surfaced with news that she attended the baby shower. Is it possible that Khloe is still upset about the birthday party and didn’t want to be in the pictures? Kim and Khloe are as close as sisters can be but it it looks like the sisters might be getting themselves locked in a little family feud.