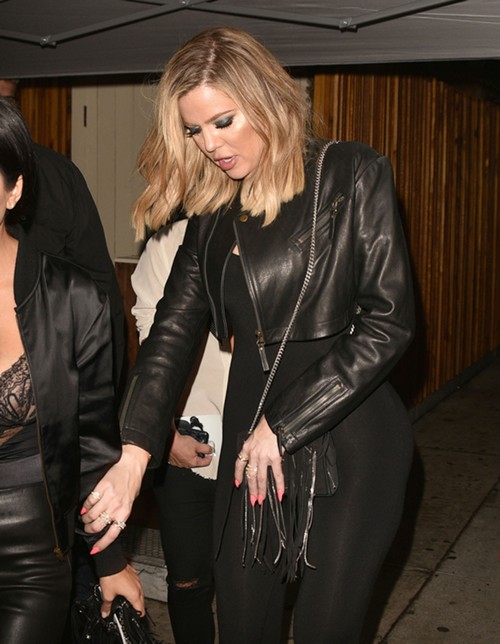 Khloe Kardashian is pregnant and there are questions about who the father might be according to a Mediatakeout report. To make the story even more shocking is that they are claiming the tip came straight from Kris Jenner.

Could Khloe Kardashian’s alleged pregnancy be the reason for ignoring Lamar Odom as the reality star gets ready to divorce Lamar once and for all?

Is Kris Jenner really leaking Khloe Kardashian’s pregnancy news to Life & Style as MTO reported? The webloid claims that Kardashian is finally pregnant but now there are questions about who may be the father of the child.

Interestingly enough, Lamar Odom and French Montana are being named as the possible father but there is no mention of James Harden. Lamar Odom?? Seriously? The dude can barely move let alone impregnate Khloe. Perhaps Lamar has some frozen sperm put away somewhere….

Why would Jenner suggest that Khloe was having a baby with Lamar Odom or French Montana. Khloe Kardashian has been dating James Harden for months and if she’ is pregnant, Harden certainly is the father, right?

This isn’t Khloe’s first round of pregnancy speculation since she began dating James Harden but this time the bomb was allegedly dropped by her own mom. Life & Style is expected to run a story about Khloe Kardashain’s pregnancy on Wednesday, December 30 and Mediatakeout even apologized already for scooping it first because they claim the news is just that insane.

Well we all knew Kris Jenner is one of the biggest leaks in the Kardashian – Jenner family. If it weren’t for Kris the family wouldn’t be famous. Jenner is known for strategically telling some very delicate family business in order to keep the Kardashian and Jenner names in the headlines so why would Khloe’s pregnancy be any different?

This does explain Khloe’s recent decision to start distancing herself from Lamar. Radar Online reported that Kardashian plans to go ahead with the divorce now. They also claim Khloe is giving up control over Lamar’s finances and medical care.

The constant supervision of her estranged husband’s health struggles is not only cutting into her own career and life but it’s putting a lot of stress on her relationship with James Harden. Khloe is really looking forward to focusing on James and their bond. If there is a baby involved, Khloe’s priorities will shift drastically and Lamar better find someone else to keep him company.

Of course CDL takes a skeptical view of secret ‘Khloe Kardashian pregnant’ stories – however there is the possibility that MTO is right, at least about L&S planning to publish such a story.