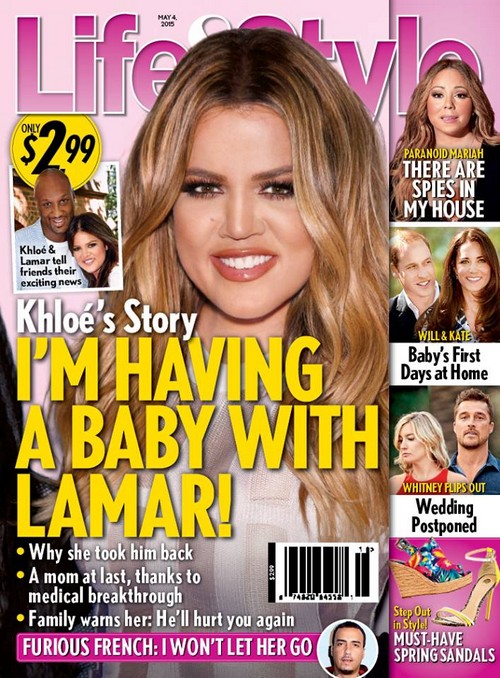 Khloe Kardashian is pregnant with Lamar Odom’s baby according to a new report! Khloe Kardashian and Lamar Odom almost got divorced more than a year ago, and Khloe has been dating French Montana on and off since then. However, she soon realized that French Montana was just a gold-digging famewhore, and has since been going back and forth from Lamar and French. Obviously, Lamar Odom is still head over heels for Khloe, but since it was his infidelity and his substance abuse issues that caused the divorce, there’s really not much he could do – except wait, which he did.

Anyway, the latest cover photo of Life & Style claims that Khloe Kardashian is now back together with Lamar Odom, and having a baby with him! Even though a ‘furious’ French Montana is apparently refusing to let her go, and her family is warning her that Lamar will hurt her again, Khloe’s hell bent on staying with Lamar and having that baby.

Life & Style also has a story on Mariah Carey’s paranoia, where she’s supposedly alleging that there are spies in her house. She probably thinks that Nick Cannon planted these ‘spies’ to get some dirt to help him in the divorce, or maybe even to help him in the rumored tell-all book that he’s planning on Mariah.

And finally, Whitney Bischoff reportedly flipped out on Chris Soules and postponed the wedding, which we could see coming from a mile away. She likely found out about his cheating or his famewhoring or his gold-digging or any number of things that would cause her to ‘flip out’ and dump his ass. Plus, I don’t think anyone – us or them – thought that they would actually get to the wedding before breaking up, so really, Chris Soules and Whitney Bischoff breaking up now is right on schedule.

What do you guys think about Khloe Kardashian and Lamar Odom getting back together and reportedly having a baby together? Let us know your thoughts in the comments below.