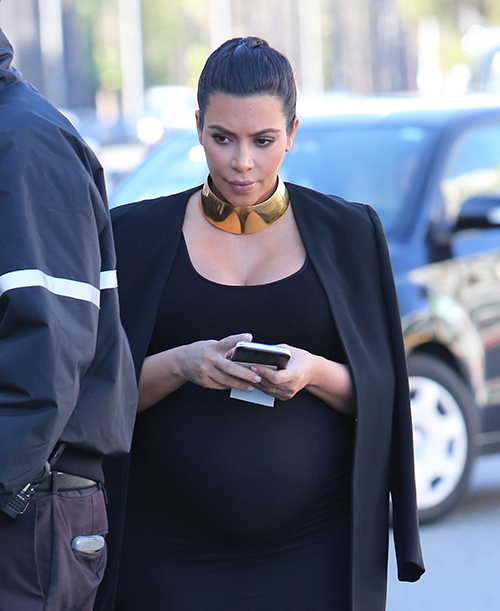 Kim Kardashian revealed that she is terrified of giving birth to her new son because of her high-risk pregnancy and there is even a chance that Kim will have to undergo a full hysterectomy when he is born. The “Keeping Up With The Kardashians” star revealed her pregnancy worries in a new blog post on her personal website on Monday, November 16 and we don’t blame Kim Kardashian if she chooses not to have more kids after this one.

Kim rambled on in a long and medical term-rich post about having preeclampsia when she was pregnant with North West. Although the major issue with preeclampsia is high blood pressure, leave it to Kim Kardashian to complain that her face and body swelled up. Of course, Kim Kardashian must look fabulous even when pregnant and darn it all if a little medical condition get in the way.

To be completely honest, Kim Kardashian’s “High-Risk Pregnancy” post read like a long paid advertisement from one of her doctors. Actually, it probably was an advertisement after Kim name dropped Dr. Paul Crane as being her OB/GYN and her mother Kris Jenner’s doctor as well. Kudos to Dr. Crane for keeping the Kardashian vaginas healthy.

The last half of Kim Kardashian’s blog post was definitely not written by the reality star. Instead it turned out to be a cut and paste of the pregnancy information that was shared in an article written about Kim K’s pregnancy over on BabyCenter. The article was dropped around the same time as Kim Kardashian’s blog post and there are hyperlinks from the article to the blog post and back. Another advertisement? It’s very likely. Since when do the Kardashians ever do anything for free?

Kim Kardashian has said her son with Kanye West will be her last baby. Kim said the same thing after she had North West but still went out of her way to have another. We all know it was important to try again because Kanye West definitely wanted a son to be his heir and to carry on the West name.

Now that Kim has fulfilled her duty and gave Kanye West a son, don’t be surprised if she really does have a full hysterectomy. The “KUWTK” star has no need for her reproductive parts anymore and as Kim pointed out, there is a slim chance that the procedure would become necessary.

Every pregnancy is different, though, and Kim hasn’t been suffering the same issues with her baby boy as she did when she was pregnant with North West. Hopefully Kim Kardashian has nothing to be afraid of and can avoid having major surgery on top of giving birth to her baby boy in December.