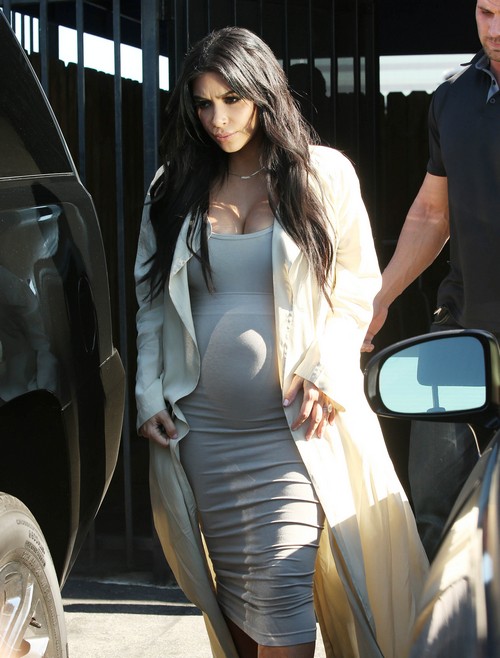 Kim Kardashian’s second pregnancy with North West’s baby brother is putting a serious damper on the Keeping Up With The Kardashian’s star’s marriage to rapper Kanye West – is Kimye getting a divorce. CDL reported earlier this week that Kanye’s emotional and insecure wife had turned into a total pregnant diva, and was convinced that Kanye was cheating on her every time she left the house, Kim has been threatening him with a divorce!

Now, sources close to Kim say that her accusations may seem a little far-fetched and ridiculous – but Kanye West is giving her good reason to be suspicious. GLOBE Magazine recently revealed that Kim and Kanye had a $750,000 floating bed installed in their new mansion – but the couple hasn’t been spending much time in it together. As a matter of fact, Kanye doesn’t seem to have any interest in sharing the bed with his pregnant wife – Kanye West’s libido has vanished!

A source dished to CDL, “Kim is freaking out because her and Kanye’s sex life went from 100 to 0, over night. As soon as she was pregnant, Kanye had literally no interest in her physically anymore. She feels used, she used to brag about how many times they had sex in a day when they were trying to conceive and now that has stopped. Kim feels like Kanye basically is not attracted to her any more, and the only reason he was having sex with her was because he wanted a baby – not because he wanted her.”

Doesn’t basically every couple go through this when they have a baby on the way? Kim Kardashian might want to hold off on filing divorce papers until after she gives birth and her hormones settle down – right now she sounds like a mad woman. Then again, maybe Kim is on to something, maybe the reason Kanye has no sex drive is because he really is cheating on her and is tuckered out by the time he comes home? What do you guys think? Is Kim just being pregnant and overdramatic? Or is Kanye really cheating? Will she go through with the divorce? Let us know what you think in the comments below!

Kim Kardashian takes her daughter North to a friend’s birthday party on August 2, 2015 in Woodland Hills, California. Kim and North were joined at the party by Kourtney Kardashian and her children Mason, Penelope and Reign.

Kim Kardashian takes her daughter North to a friend’s birthday party on August 2, 2015 in Los Angeles.