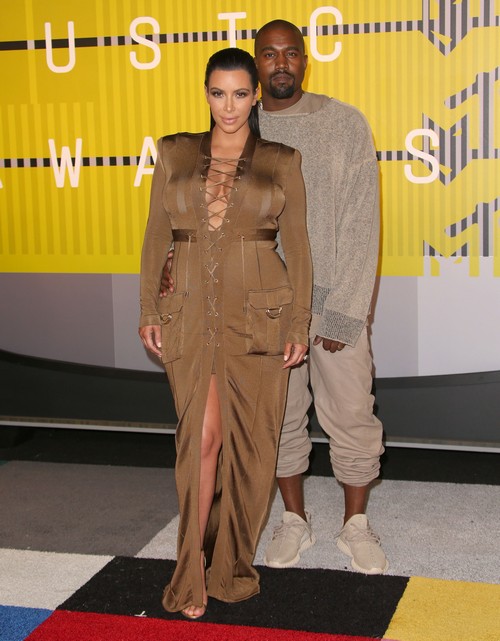 Kim Kardashian and her husband Kanye West have been reported to be on the verge of divorce for months, the only thing keeping their marriage together is the fact that it would be career suicide to dissolve the Kimye brand now. Kim and Kanye have good heads for business, and they both know they are worth way more when they are married than they will be divorced. The couple has been reportedly fighting over everything under the son, and now they have an additional half a million dollars to bicker over. Kim may be worth millions, but her bank account is usually pretty empty – she blows through money before she even has it in her hands.

Remember that guy that was dumb enough to leak videos of Kim and Kanye’s engagement – even after he signed an ironclad contract stating he wouldn’t do exactly that? Well, Kim and Kanye’s lawsuit has finally been settled in court – and the judge awarded them $440,000 for the video leak. Since Kim and Kanye are basically only married on paper and can’t stand to be around each other – they have been keeping their finances separate for months now. And, spendaholic Kim is not happy about it.

Kim Kardashian has even confessed to having a serious spending problem in the past, and easily blowing through $1 Million a month. According to our inside sources, when Kim and Kanye began discussing a divorce – they decided to keep their finances separate from here on out, and that meant Kim didn’t have access to Kanye’s bottomless bank account anymore. The KUWTK star has been reportedly living paycheck to paycheck in the past, and apparently her checking account is looking pretty dry right now.

When Kim and Kanye were awarded $440,000, Kim was thrilled – she already basically had the money spent. But, then Kanye threw a wrench in her plans and she reportedly freaked out. Our source dished, “Kanye shocked Kim when he informed her that they were splitting the settlement, fifty-fifty. Kim was livid. She knows he doesn’t need the money, and $200,000 is nothing to him. Kim feels like he is doing this out of spite, and in her eyes Kanye is throwing her crumbs and enjoying watching her starve. Half a million dollars is a drop in the bucket for Kim and Kanye, it’s the principle of it. Kanye is worth way more than Kim, and she thinks he is being selfish.”

Kim might as well get used to living on Kanye’s “crumbs” – because at this rate a divorce is going to happen sooner rather than later. How much longer do you think Kanye is going to put up with Kim for the sake of their Kimye brand? Is Kanye being petty by splitting the settlement with her? Let us know what you think in the comments below!

Kim at the MTV VMAs and afterwards at Craig’s

Kim Kardashian is spotted out and about in Beverly Hills, California on August 28, 2015. Kim, who is expecting her second child with rapper Kanye West, hid her large baby bump under a tight grey jumpsuit. FameFlynet