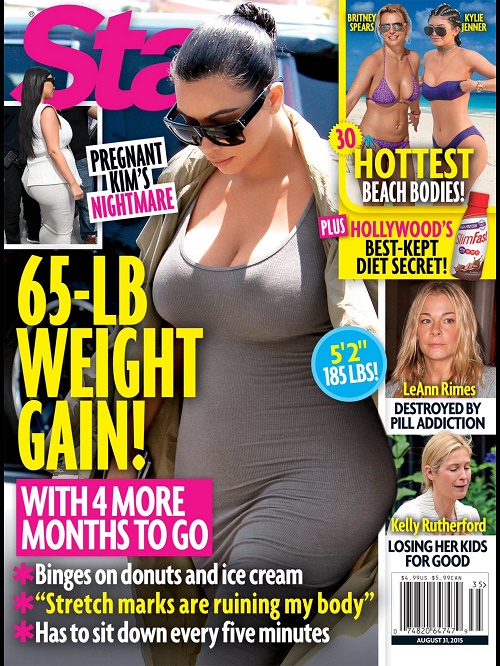 Kim Kardashian and Kanye West’s marriage was in trouble long before the Keeping Up With The Kardashians star got pregnant with baby number two. Kimye’s pregnancy was supposed to fend off their pending divorce – but it looks like it is having the opposite effect and just making a divorce more likely. Kim Kardashian’s rapidly growing baby bump and baby weight is putting a huge damper on their marriage.

Kim Kardashian has confessed in the past that Kanye expects her to be in tip-top shape, and even has had a personal trainer and dietitian work with his wife and has put her on strict diets in the past. So you can imagine her husband’s disapproval when Kim Kardashian began packing on the baby pounds at a rapid pace – and could no longer fit into her designer latex dresses and stilettos.

Kanye isn’t a fool, he knows his wife is obviously going to gain weight – but he knows that she could have done a much better job of staying in shape during her pregnancy. A source close to Kanye’s circle dished that the rapper is frustrated because he thinks that Kim uses pregnancy as an “excuse to let herself go.”

This week’s edition of Star Magazine featured a photo of Kim Kardashian’s massive baby bump on the cover. The tabloid revealed that Kim has already gained 65 pounds, and she is only half way through her pregnancy and has four more months to go! Star goes on to reveal that Kim has been binging on “donuts and ice cream,” and the KUWTK star has gotten so large and in charge that she has to sit down every five minutes to take a break.

Of course, Kim’s massive size and image-ruining stretch marks have made the reality TV princess a hot emotional mess – and her diva antics over her pregnancy pounds have only added more stress to her marriage with Kanye.
So, on top of the fact that Kanye West is a cold-hearted savage who has the gull to tell his pregnant wife that she is getting too fat, Kim’s hormones and emotions are out of control and she can’t be reasoned with. At this point, a divorce might be the best choice for Kimye – before there is a bloodbath at the Kardashian-West Mansion.

Do you think Kim is being overly emotional or over-reacting? Or has Kanye West crossed too many lines? Would you blame her right now if she followed through with her threats and did divorce him? Let us know what you think in the comments below!

Pregnant reality star Kim Kardashian is spotted heading to a clinic with a friend in Beverly Hills, California on August 24, 2015.

Kim Kardashian takes her nephew Mason Disick shopping in Los Angeles, California on August 22, 2015. Among the stores the pair made a stop at was Babies-R-Us so Kim could get some things for her unborn baby and a toy for Mason.