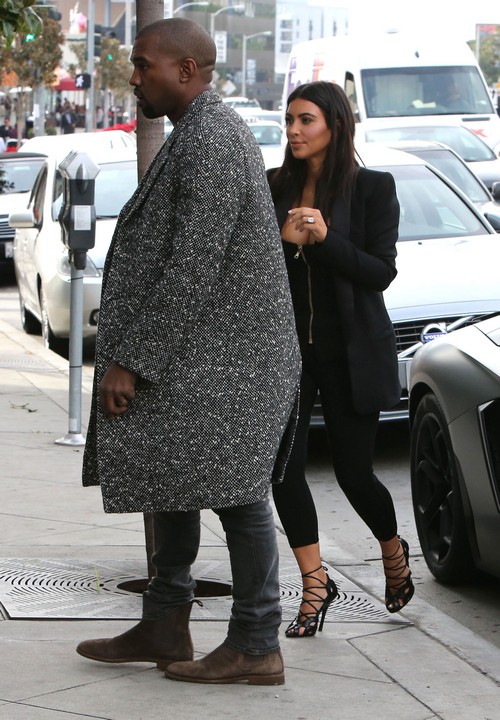 Kim Kardashian is allegedly furious and ready to divorce hubby Kanye West after he  failed to come to her defense after Charlie Sheen ripped her for being a selfish jerk, telling her to “Go F**K Yourself” and that he hopes Kanye’s “vision returns one day.” Kim Kardashian and Kanye West were already dealing with major marriage problems, so when Charlie Sheen went on a Twitter rant slamming Kim for neglecting a young fan she ditched, ignoring her sweet request for an autograph, Kim was more upset with Kanye than ever. She was completely embarrassed that Kanye said nothing at all, especially given the fact that she usually can’t shut him up when he is ranting about something he feels passionate about.

All Kim kept complaining about was that Kanye never responded to Charlie Sheen, never said a word, or tweeted  a response after the former Two and a Half Men star went off on her with these little ditties,

“You are lucky that ANYONE cares about your gross and giggly (sic) bag of funk you dare call an a–. Your public loves u. give something back or go f yourself. My apologies to your hubby, great guy I’m sure, I hope his vision returns one day.” And that “vision” he refers to can mean any number of things. He may have meant that after looking at her, Kanye went blind. Or, perhaps, that now that he is with her he no longer is the music visionary he once promised to be. Or, it could mean that Kanye is blind to his wife’s selfish actions. In any case, none of the comments are complimentary to Kim, and she wasn’t happy about it. What made her most upset was that Kanye didn’t even defend her after Charlie brought Kanye into his rant with even more disparaging comments about Kim—which, in Kim’s eyes, made her look like a fool and made Kanye look like a wuss.

Kim Kardashian went off on Kanye West for not defending her, saying real men defend their woman or wife. Kim’s people advised her not to engage in a Twitter war with Charlie, but Kanye knows no bounds when it comes to diplomacy and tact, so it would have been totally appropriate for Kanye to respond. Kim told friends that Kanye always acts tough when he knows he won’t come out looking bad. She said Kanye was too wimpy to get into anything with Charlie, or he just didn’t care about defending her. Either way, she shared, she cannot wait to divorce Kanye and find a real man who she is passionate about and has chemistry with.

If Kanye was hoping to save the marriage from divorce, he sure made a big mistake with Kim.  This marriage is going downhill… fast!

CDLers, should Kanye have defended Kim. Would it have even helped? Is she just being dramatic? We want to know what you think…weigh in below.