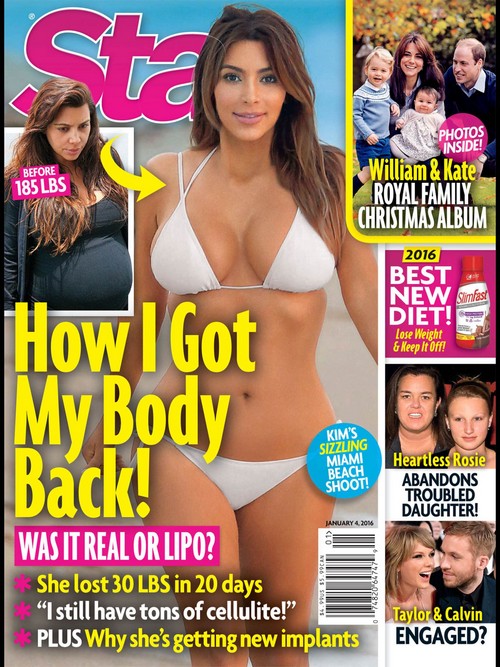 Kim Kardashian is going to the extreme to lose weight after giving birth to Saint West in November. Kim allegedly had plastic surgery, a tummy tuck and liposuction – started a crash diet and intense workout routine as soon as she left the hospital in a bid to get her body back as soon as possible. Kanye West isn’t stopping his wife from the grueling routine because he’s happy to see Kim’s curves as they start to reappear.

Kim has lost 30 pounds in just 20 days because of her very restrictive diet and exercise routine. Star magazine reports that Kim is limiting herself to a starvation diet of just 1,000 calories per day despite most doctors recommending double the amount for new mothers. Kardashian is also living in the gym at her mother Kris Jenner’s house.

There is more to Kim Kardashian’s extreme post pregnancy weight loss. The Keeping Up With The Kardashians star may be keeping a huge secret. In addition to an extremely restrictive diet and a workout routine that defies most post-baby advice, Kim may also be having some surgical procedures done to help bounce back quicker.

Even though Kardashian has confessed that she is nursing the newborn Saint West, that hasn’t stopped her from having a few plastic surgery – cosmetic procedures already. “There’s buzz that Kim had a tummy tuck and liposuction right after she delivered Saint,” claims a source for Star.

The Kardashian insider also said Kim was very concerned about cellulite after giving birth to her new son. Kim has reportedly already underwent a procedure to reduce the imperfect areas.

Kim Kardashian has been putting so much time and energy into getting back into shape that she’s having to lean on Kris Jenner even more than usual lately. Naturally Kim’s crash diet and intense workout sessions are causing Kardashian to be really exhausted.

Kim obviously should be taking it easier on herself, considering she just gave birth. The reality star won’t listen though and reportedly thinks the results are worth the risk.

Kris Jenner reportedly doesn’t like the way Kim is pushing herself and is worried for her daughter’s health. After such a high risk pregnancy and delivery, Kardashian needs to let her body heal and she’s not taking the breaks necessary to recover.

Instead, Kim continues to update fans about her current successes in getting her body back as fast as other famous moms have recently.

Kanye West is surprisingly on board with Kim’s over the top weight loss plans. The rapper is happy to see Kim getting her famous curves back so fast and hasn’t said much about the dangerous way she’s getting results. Hopefully Kim will calm down about her infatuation with losing weight before she pushes too hard and her health suffers.