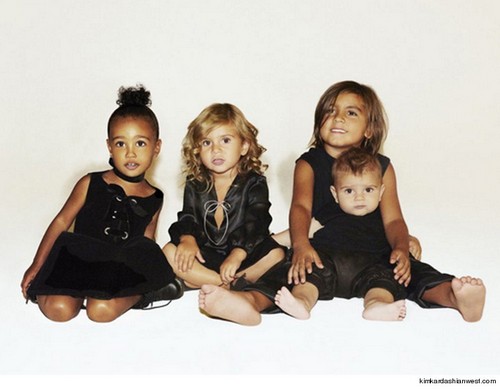 On December 23 Kim Kardashian unveiled the 2015 Kardashian Christmas card – and it is nothing like what we expected. As a matter of fact, it might be the most modest and borderline depressing card the over-the-top family has ever churned out.

If you were hoping to see Rob Kardashian dressed as Santa Claus (appropriately so), Caitlyn and Kris Jenner fighting over who gets to be the Christmas matriarch, and Kylie Jenner half naked – then you are going to be seriously disappointed.

This year the Kardashian Christmas card ironically doesn’t contain a single Kardashian, instead it is just a photo of the newest generation of the family: North West and Penelope, Mason, and Reign Disick. The children are even dressed modestly, no wild outfits or insane backdrops.

To be frank – the photo looks like something Kim snapped on her cell phone. And, she edits her own photos better than she did the one of the kids.

So, what happened to the Kardashian Christmas Card that we have been waiting weeks to mock relentlessly? Well, what didn’t happen? The Kardashian Family can’t even stand to all be in the same house with each other – let alone pose for a photo.

Here are the top five reasons the Kardashians totally crapped on the embarrassing Christmas card that they owed us:

Kim Kardashian is not going anywhere – let alone posing for a holiday card that will be plastered on the covers of dozens of magazines until she loses at least 50 pounds, and makes half a dozen trips to a plastic surgeon. Sadly, any normal woman would be totally okay with a bit of baby weight. And, to make matters worse, her hubby Kanye refused to allow their cash cow kids to pose for “THE” Kardashian Christmas Card. Notice Saint wasn’t even in the photo with his big sister North?

Who knows if Caitlyn and Kris Jenner are on speaking terms this week. But, it would be a cold day in hell before Kris Jenner let her ex-husband steal the thunder and show up to the Kardashian Christmas Card photo shoot looking better than she did. Notice Kris doesn’t pose for too many photos with her ex? There’s a reason!

You can only imagine the battle that went down over who’s significant other could pose in the photo. Tyga was crashing that Christmas card one way or another – there’s no way he was going to miss out on an opportunity to make a couple bucks off his girlfriend’s famous family. But, if Tyga posed – then that means Corey Gamble could too, and James Harden. How would Lamar feel when he got the card in the mail at the hospital?

The Kardashians Hate Each Other

This is hard to believe, but there is actually someone out there that hates Kim, Kourtney, Khloe, Kylie, and Kendall more than we do – themselves. Kim Kardashian is still wildly jealous of her little sister Kylie Jenner. Kyle and Kendall have been feuding over their own jealousy issues for months. Kourtney Kardashian’s sisters can’t stand the sight of her since she started letting Scott Disick weasel his way back in to her life. And, Khloe is just miserable (rightly so), and can’t stand anyone at the moment.

Oh, Rob Kardashian – you Christmas scrooge. Rumor has it that Kris Jenner was shopping the card to media outlets with her son Rob part of the package. But, Rob demanded over $100,000 for his appearance because he knows the press would kill for a full body shot of him. Apparently hiding away for two years really ups your value. But, at the last minute the deals fell through because Rob pulled out of the card after he and his family had a huge blow-up over his BFF Lamar Odom.

Are you as disappointed as we are in the 2015 Kardashian Family Christmas Card? Why do you think it turned out to be a total bust? Let us know in the comments below. But, for the record – we do like North West’s dress.