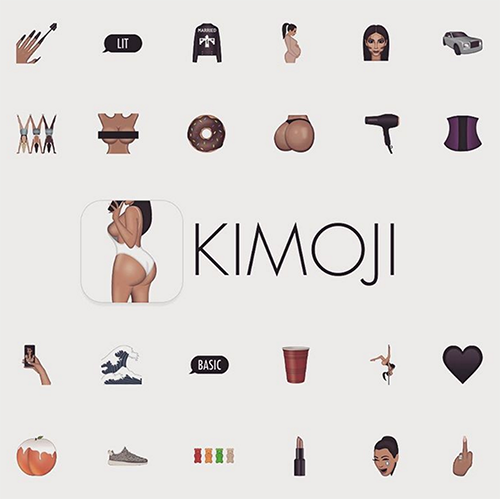 Kim Kardashian Kimojis have caused chaos! Kylie Jenner probably had a meltdown after the Kimoji app shutdown the Apple Store during the launch. Kim K has reclaimed center stage!

Millions of downloads of Kimojis sent the Apple Store into a complete tizzy. As soon as the app launched there were hundreds of complaints that the Kimojis didn’t work, devices were crashing, the new Kim-centered emojis wouldn’t load, etc. But that didn’t stop the Kimoji buying frenzy. A reported 9,000 downloads per milliseconds took place.

There was a lot of bragging on Twitter by Kim. One tweet read, “Ahhhhhhhh I still can’t believe we broke the entire App Store!!!! #KIMOJI.” Kim was super-thrilled to be back as the top Kardashian. Twitter followers declared Kimmy “The Queen of Apps.”

Kanye West certainly was a very happy man! The entrepreneur took to Twitter and announced, “I’m so proud of my wife! This KIMOJI idea is so dope…” Kris Jenner couldn’t help but jump in on social media to express her excitement! As the Kimoji s hit the number one spot in the App Store, Kris tweeted, “Number 1 in the App Store!!!!!! @kimkardashian #KIMOJI.”

Khloe Kardashian and Kourtney Kardashian checked in with Kim on Twitter after the launch. But, nothing from Kylie personally. The only thing that popped up on Jenner’s Twitter account was a retweet – a follower believes Kylie needs her own emojis. Was Kylie so jealous that the “Keeping Up with the Kardashians” star couldn’t be bothered to say anything nice at all?

Kendall Jenner had nothing to say about Kimojis either. On Kim’s big day Kendall tweeted about high-end items available for sale in Jenner’s Secret Closet store – and how to get the mobile app to make shopping from mobile devices easier.

Is the super-sized success of Kimojis going to cause an even bigger rift between the Kardashian and Jenner sisters? As the momager of this brood Kris Jenner gets her cut no matter what happens. Whatever brings in the ratings and keepings the money flowing into the bank accounts, right?

An escalation of the Kim Kardashian and Kylie Jenner feud might just be a bonus ratings boost for “Keeping Up with the Kardashians.” We wonder if cameras were filming as Kim squealed with glee as the mother of two broke the Apple App Store.

Has Kylie been knocked out of the number one position in the Kardashian-Jenner pecking order? What will Kylie Jenner do next to one-up Kim Kardashian?