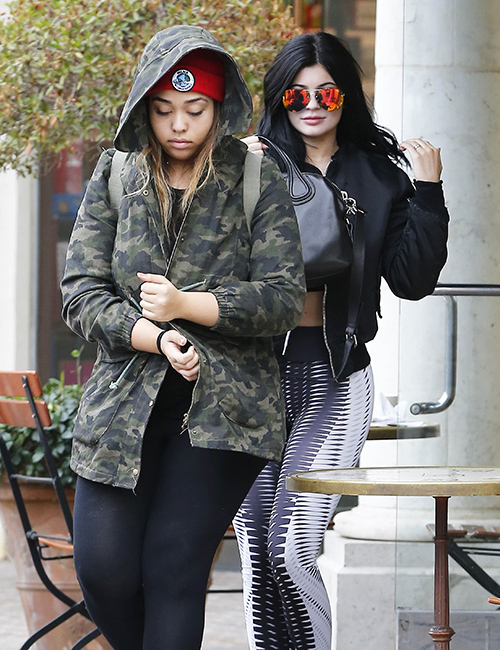 Kim Kardashian and Kylie Jenner could be facing a bitter battle. Is there a desperate struggle for the spotlight with the launch of the new Kimojis? Kimoji is a new set of specially designed Kim K emojis. The app launched on December 21 and it looks like there’s going to be another Kylie and Kim clash. Kim may lose this round. Instagram followers are complaining that the Kimoji app doesn’t work, saying it causes devices to crash, etc. One follower complained that the app has to be turned off and on every time it’s used.

Sounds like a hot Kimoji mess. Was there this much complaining when Jenner launched apps in her iTunes store? Khloe Kardashian and Kourtney Kardashian checked in with their thoughts on the new app. Kim posted the convo on Instagram. But nothing from Kylie! Nothing at all from Kendall either.

Despite the fact that Kim’s son Saint West’s birth was treated as if it were THE event of the year, Kim can’t get enough attention – or does it just feel that way? Now, we have a new emoji-like system featuring the famous reality star! Currently, it appears as if there is a plethora of Kim’s infamous derriere; one of Kim K’s ample bosom; and, believe it or not, a naked Kim covering said ample bosom and displaying the enormous baby bump.

The Jenner and Kardashian sisters aren’t getting along. Or, at least they weren’t when this season’s “Keeping Up with the Kardashians” was filmed. Kim is obsessed with being in the spotlight. Now, younger sisters Kylie and Kendall are horning in on Kim’s territory and Kimmy doesn’t like it one bit. There could be an all-out Kardashian-Jenner blowout brewing.

Is Kim Kardashian on the way down and Kylie Jenner on the way up? Is Kim’s time as the superstar of the family over? Is it time for a new favorite? Will the name of the E! reality show be changed to “Keeping Up with Kylie and Kendall”?