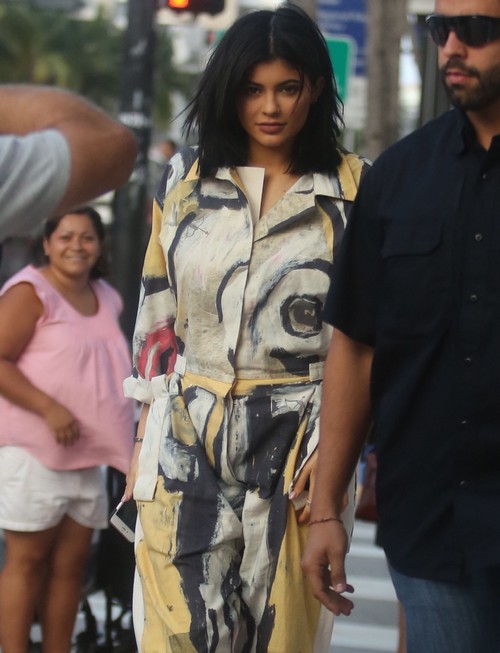 Is Kylie Jenner jealous of Kim Kardashian to the point of hate? It certainly seems Kim’s little sister isn’t a fan of Kimye after she ignored the birth of Kim and Kayne West’s new baby boy. It looks like Kylie considers older sister Kim to be her rival thanks to Kim’s habit of hogging the spotlight.

Kylie Jenner is like that little sister who is so desperate to be noticed that she develops a habit of setting things on fire to get attention. Coming from the Kardashians, who made themselves famous thanks to a sex tape and will pull stunt faster than you can say PAYCHECK for ratings and media focus, that likely makes Kylie’s attitude even more desperate.

On Saturday, Kylie was shopping with Hailey Baldwin during her break from Art Basel. Jenner and Baldwin spent the day hitting their favorite stores in Miami. The BFFs also enjoyed lunch out and, as TMZ loomed with cameras asking about Kim Kardashian’s new baby boy, Kylie snubbed the opportunity for press – refusing to talk about big sister Kim’s new baby. In fact, she was somewhat icy when it came to dealing with the press she normally enjoys.

Kylie isn’t the only Kardashian who seems unimpressed with Kim and Kayne West’s baby boy delivery. While Kourtney Kardashian was at the hospital, supporting Kim through her labor, Kylie Jenner was shopping and her ex-boyfriend, Tyga, was checking out new cars with Kourtney’s ex, Scott Disick.

Scott was reportedly banned from the hospital where Kim Kardashian gave birth to her first son. Disick and Kourtney and rumored to be in couples counseling since Scott actually finished his fourth attempt at rehab.

Kylie Jenner’s lack of interest in Kimye’s new baby boy didn’t stop with the shopping spree and lunch. Kylie and Hailey followed their shopping spree with a night out on the town. Jenner and Baldwin hit the Matador Room at The Miami Beach Edition Hotel on Sunday night and then partied at The One Hotel.

On Monday morning, Kylie still made no mention of Kim and Kayne’s baby boy and focused on her Lip Kit makeup selling out. The ‘Keeping Up With the Kardashian’ star posted a picture of herself wiping away a tear with the caption, “After trying to buy Kylie’s lipkit and it was sold out in 30 seconds.” Later, she posted another Tweet stating, “Let this weekend be over so everyone can get their lip kits.”

Looks like her new nephew isn’t really on Kylie’s mind! What do you think? Does Kylie Jenner really hate Kim Kardashian and is ignoring Kim and Kanye West’s new baby boy because she thinks of her older spotlight-hogging sister as a rival? Let us know your thoughts in the comment section below and keep checking back for more updates on Kim Kardashian and Kylie Jenner’s sibling drama.

Kylie Jenner and Hailey Baldwin go shopping while they are out and about in Miami, Florida on December 06, 2015. FameFlynet