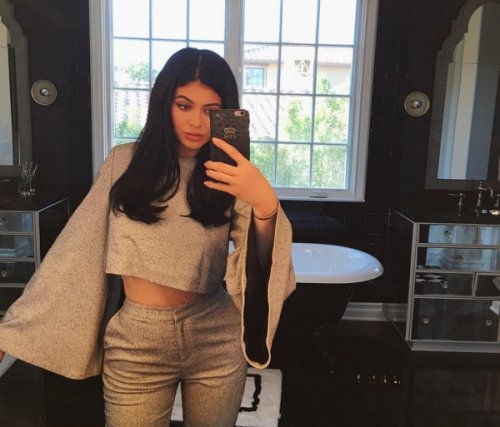 Kim Kardashian’s jealousy of her little sister Kylie Jenner is about to hit an all-time high – courtesy of Kylie’s most risqué photo shoot yet. It’s no secret that Kim is jealous of the fact that 18-year-old Kylie Jenner is on the road to surpassing Kim’s fame and fortune in no time.

Kylie is basically the younger and hotter version of her big sis Kim. Rumor has it that Kim even threatened to sue her little sister for royalties because she was “stealing her image.”

Kylie Jenner scored the latest cover of Interview Magazine, and she shot some super risqué photos with celeb photographer Stephen Klein – seriously these pictures even made us a bit uncomfortable.

The photo spread has a 50 Shades Of Grey theme and features Kylie in a skin-tight black latex jumpsuit – which includes chaps and shows off her bare butt.

In one of the pictures Kylie is bent over with her bare butt in the air, in another she is balancing a tray of drinks – butt cheeks on full display. Then there is the bizarre shot of her in a gold wheelchair.

We’re not sure if Kylie Jenner was going for “hot,” “artsy,” or just downright weird – either way she accomplished all three and could give her big sister Kim’s Paper Magazine cover a run for its money.

Of course, Kim Kardashian is not taking the news well. An insider close to the Kardashian camp dished, “Kim can’t even bear to look at the photos. She knows Kylie looks good and it is killing her inside. It’s bad enough that Kylie is so much younger, but Kim can’t compete when she is 8 months pregnant and a hormonal mess.”

Kim Kardashian might as well hang it up – within another year Kylie Jenner will have successfully stolen her big sister’s throne. Do you think that Kim is being petty, or did Kylie really steal her sister’s image and style and profit off from it? Let us know what you think in the comments below!