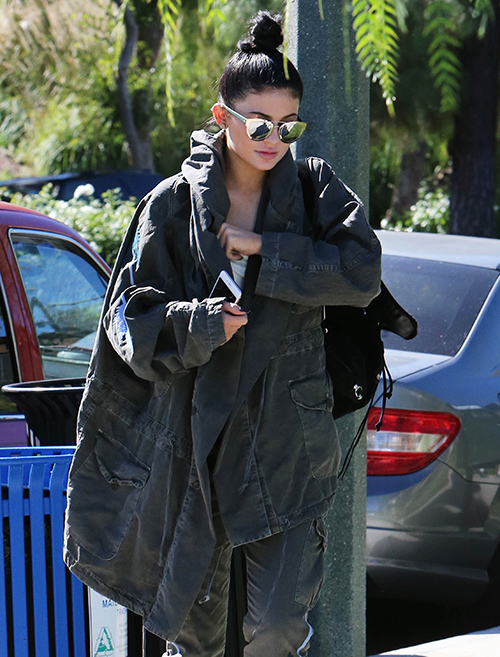 Kylie Jenner has been caught bragging about why she is hotter than Kim Kardashian now. Kylie was recently talking to Time magazine after they named her to their “Most Influential Teens” list and she blamed age and her ability to relate to the fans for her recent shot to stardom.

Kylie explained why she easily beat Kim in ratings when the Kardashian and Jenner sisters recently launched their own apps and websites on the same day. “Kim’s older, she has a different fanbase,” Kylie Jenner told Time about her recent victory over Kim Kardashian. As Kylie broke it down for the magazine, she made it clear that as Kim Kardashian has aged, she has become less interesting.

“I invite the cameras over and say, “Oh, hey, let’s just do this.” We do make-up tutorials and I’m laughing and talking. I know my fans are my age or younger than me, so, I just like to show my personality and show my fans my home and my dogs.” Kylie went on, “I get really personal. I’m on Snapchat, and I’m just like them at the end of the day. Kim’s more private. She has kids. It’s just different.”

It’s different all right…about 17 years different. Kylie Jenner just turned 18 years old and is already dominating the headlines with some of her very adult behavior. Kim Kardashian just celebrated the big 35 last week and is definitely at a different point in her life. Kim is about to give birth to her second child and has been happily married to Kanye West while Kylie parties the night away with her older boyfriend Tyga.

No matter how many huge surprises Kanye plans for Kim, they just can’t win out in a ratings war right now. Kylie is still barely 18 years old in a controversial relationship with her rapper boyfriend, a never ending celebrity feud with his baby mama and she happens to look like a younger version of Kim Kardashian. Kylie Jenner is the hotter sister right now and it has gone straight to her head. Kylie is very aware of her current star power and she’s very proud of her popularity.

Kylie Jenner predicted earlier this year that she would be bigger than Kim Kardashian and she was right. Kylie knows what it takes to connect with her fans and that means doing the same things that they do. Jenner is known for using SnapChat to share selfies of herself and friends.

The rivalry between Kim Kardashian and Kylie Jenner is reportedly growing because Kim isn’t one to step out of the spotlight for long. The pregnant Kardashian can’t wait to have her baby boy and then take her internet crown back. When it was first announced that Kylie Jenner’s app was more popular, Kim Kardashian posted the sexiest of her pre-pregnancy photos in an attempt to gain an edge.

The throwback photo bomb worked a bit and there was speculation that Kim might actually beat her little sister in the ratings war. Kylie was able to edge out her sister though and ever since Kylie Jenner got the best ratings out of all the apps, her ego has been out of control.