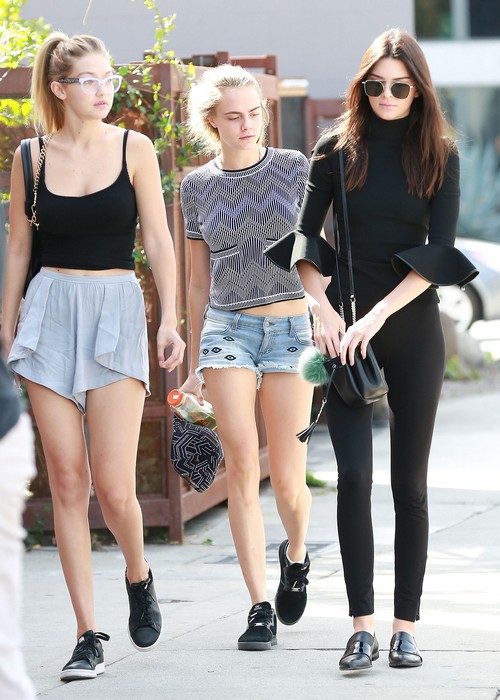 Kendall Jenner was so disgusted by sister Kylie Jenner’s PDA session with Tyga she had to turn her back on it. But Kendall should get used to it – the youngest Jenner daughter and the rapper are seriously in love.

The trio was standing outside Sunset Tower Hotel on Thursday, October 22 and Kylie and Tyga couldn’t keep their hands off each other while waiting for the valet to bring his Rolls Royce around. Poor Kendall had to either endure the couple’s hugging and kissing or walk away.

She chose the later – she turned and walked away. In the photos published by the Daily Mail Kendall Jenner is appears to be holding her nose like something smells bad as Kylie Jenner and her boyfriend are locked in a tight embrace and kissing in the hotel entranceway.

Kylie Jenner’s relationship with Tyga has caused quite a bit of friction in her relationship with Kendall. The romance has reportedly driven a huge wedge between them because Kendall is tired of Kylie schlepping Tyga with her everywhere the go – including a family trip to St. Barths in August which was taped for an upcoming episode of “Keeping Up With The Kardashians.”

Maybe Kendall is worried that Kylie is taking on too much dating a guy seven years older than her – Tyga has a 2-year-old son with his ex-girlfriend Blac Chyna. If the couple is that serious Kylie just may jump into marriage and gain and instant family. But it could also be that Kendall Jenner is jealous of her little sister’s romance. Kendall is currently single – though she has been linked romantically to both Nick Jonas and Joe Jonas.

The Jenner girls have burgeoning modeling careers and Kylie may want to consider focusing more on that than on guys. She’s much too young to be in a super serious relationship – especially with a guy who already has a child.

But Kylie Jenner is completely in love with Tyga – and Kendall Jenner doesn’t approve. It seems that rather than fight with her sister she’s just going to keep her mouth shut and walk away. Eventually Kylie will figure out what a jerk Tyga is and they’ll break-up for good

Kylie and her guy should keep the PDA to a minimum – the world knows you’re love okay already? You don’t need to put on a show in front of your sister to prove your devotion. After all – Tyga has Kylie’s name tattooed on his arm. Nothing says love like tattooing someone’s name on your arm – unless it’s putting a ring on your gal pal’s finger.

Kendall Jenner spotted out for lunch with friends Gigi Hadid and Cara Delevigne in West Hollywood, California on October 24, 2015. Kendall was mad that her BFF Cara Delevigne had been hanging out with her sister Kylie but it seems like the pair have patched things up. FameFlynet