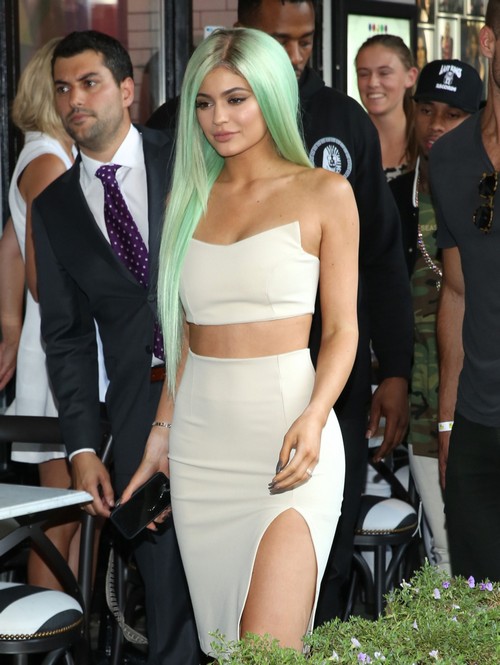 This week’s edition of OK! Magazine reveals that Kylie Jenner and her rapping boyfriend Tyga already have sex tapes made, and they just need to decide which one they are going to sell. An insider dished to OK! Magazine, “They are no strangers to having cameras in the bedroom. They love filming themselves, especially because Kylie’s vanity is out of control. At this point they already have more than one sex tape to choose from, if Kylie decides to take Vivid up on their offer.”

Kylie Jenner’s family has mixed feelings about the idea of her selling her own sex tape. Of course, her greedy momager Kris Jenner is on board with the idea – and has been pushing Kylie to take Vivid up on their offer. According to OK! Magazine’s inside source, Kylie’s big sisters Khloe and Kourtney are horrified by the idea – and they have made it very clear that they do not approve of it. Kim Kardashian on the other hand is NOT saying anything… wonder why?

While Kylie decides if she wants to sell her sex tape, she is going to use the time to continue posting practically naked pictures of herself on Instagram to continue building up her rapidly growing fan base of perverts who are desperate to see the 18 year old stop teasing and finally take it all off. Do you think that Kylie Jenner will agree to sell her sex tape like she did Kim’s? Or will she pass on the offer? Let us know what you think in the comments below!