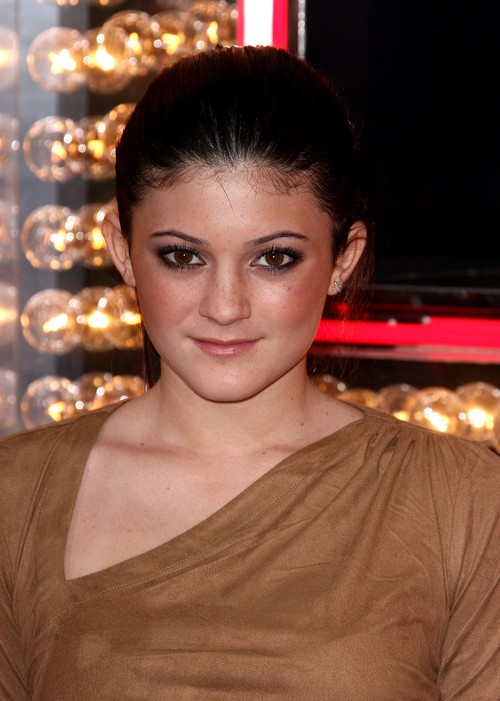 Kylie Jenner looks very different than she did a few years ago and some would say that plastic surgery, Botox, and implants have played a role in the transformation. Above and below is Kylie Jenner back in 2010 and 2011 respectively. She’s got thin lips, a widish nose and a pretty round little face. She’s certainly no supermodel, but she’s a cute kid. So why can’t her famewhore Kardashian-Jenner family just let her be without implants and plastic surgery. Perhaps they’re not actively pressuring her to get her face carved up and become a cosmetic surgery addict like Kim Kardashian, but they are essentially peer pressuring her into it by getting themselves implanted, Botoxed, lip puffed and other cosmetic atrocities.

Then there’s the proliferation of sexy pouty photos her siblings, Kendall Jenner, Khloe Kardashian and of course the grande dame of sex tapes, Kim Kardashian, post constantly. Pile on top of all that sister Kendall Jenner who is genuinely gorgeous (Kendall, not the other ones) without all the surgical tweaks and getting fame (almost) on her own as a model and you’ve got a recipe for low self-esteem and a desire to alter what her true nature is.

In short, it sends a clear message that who you are isn’t good enough. So let’s look at what Kylie’s clearly done, or had done, to her face – despite the claims that she’s just growing into her face, that it’s makeup, puberty or whatever other lame excuses their PR machine has invented.

So, from the top down, let’s look first at those eyes and eyebrows. Kylie’s eyes are nice, but pretty blah and her eyebrows are pretty much flat with a small space between her eye line and her brow.

Here is Kylie a couple of months ago and we see that her arch is drastically higher. Even if she’s raising her eyebrow in this pic, she can’t be in all of them, her eyes would be exhausted. Botox is a common tool to achieve this type of targeted lifting action. She’s 17, why not pour botulism into her head?

The sides of her nose also looks a bit more sculpted, but I can put that one down to makeup. Contouring and highlighting can make a nose seem whittled down. However, the tip of her nose looks like it may have lopped off a bit. Look at the area between her upper lip and tip of her nose and you’ll see it looks slightly larger and the tip slightly less pointy. If her nose was tweaked, it was done subtly and well. 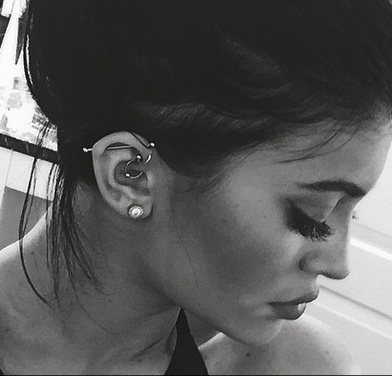 She still has a puffy little face at this point. But look at these two pics below. Her jaw line looks taut and a little strange. But the face fat is gone. This is more than you can explain away with the loss of baby fat. Plus since she’s just 17, the time for baby fat melting away has yet to come and go.

There’s always a chance she’s Photoshopping her face in her IG photos but even press photos show a drastically different face. Now let’s look at the lips. Everyone’s been talking about Kylie’s lips and with good reason. Look at the first photo – the young woman has paper thin lips. Puberty doesn’t cause lips to puff. Pregnancy can do that, bee stings can do that and even a severe allergic reaction. But since she’s not knocked up (yet), not traveling with an entourage of apians and is only allergic to a lack of attention, the obvious answer is a plumper – and a lot of it. 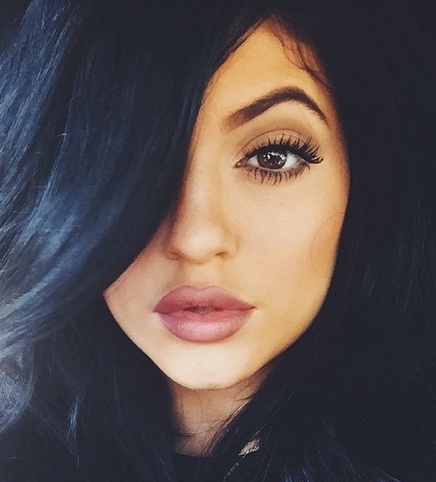 And don’t try and say it’s lip gloss. Nope. It’s collagen or another filler syringed into her lips. There’s no denying it no matter what. There is no science behind going from lips 1/8” wide to 1/2” wide overnight. No, no, no. She’s got Angelina Jolie lips now but if you look at Angelina’s childhood photos, you’ll see she’s always had that plump pouter and it didn’t just crop up on her face spontaneously. Unlike Kylie’s mystery face apparition. Finally, let’s look at her chest. I know it’s routine for California teens to get enhancements, this is just icing on the Kylie plastic surgery cake.

Here is Kylie with her big sis Khloe giving her a kiss. It’s a sweet photo but what stands out to me clearly is the clear outline of her right breast implant peeking out of her sweater. That’s not how natural breast tissue behaves. That’s a bag of silicone. I do have to give her props since she didn’t opt for giant fun bags, but still it’s just one more thing to make her less herself and more some crafted avatar intended for social media consumption.

Where is her mother in this? Why hasn’t she said no? Why hasn’t she told her daughter that she’s beautiful as is and to embrace herself rather than trying to tear it apart and rebuild it artificially? And if she has taken this approach but Kylie rejected it, why didn’t she just tell her no. At 16 and 17, Kylie can’t have surgery and other cosmetic procedures without both parental permission and money to pay for it.

There are a couple of ways to look at this. We can see Kylie as a victim or a perpetrator. And knowing that family, I think it’s the latter. She’s seen how her big sisters have benefited from their looks and with her looks as they were, she wasn’t going to benefit. And that’s not to say she was unattractive or unworthy, but she definitely didn’t have model good looks. So why not consider a real career doing something? Her family can certainly afford to put her through college. But it’s easier to carve herself up and sell herself based on her looks. This is just lazy opportunism.

And while it may work now to get her some modeling gigs, eventually it’s going to cost her. It’s one thing to get Botox in your 30s or a facelift in your 50s, but monkeying with your skin when you’re still a teenager will cost you in the long run. Surgery damages your skin and requires more and more maintenance and results in a less natural looking face. If she keeps this up, she’s going to look like Joan Rivers did at 80 when Kylie is just 40.

So Kylie, lay off the Botox and quit posting inappropriate and unlikely photos of your ever-changing face and age-questionable social activities on IG. Be a normal 17 year old – get your high school diploma (and not some sketchy home school crap like you’re pursuing), go to college and be a real person from the inside out. Or wait until you’re 18, make a sex tape and follow your sister Kim’s “career” path. Either way…