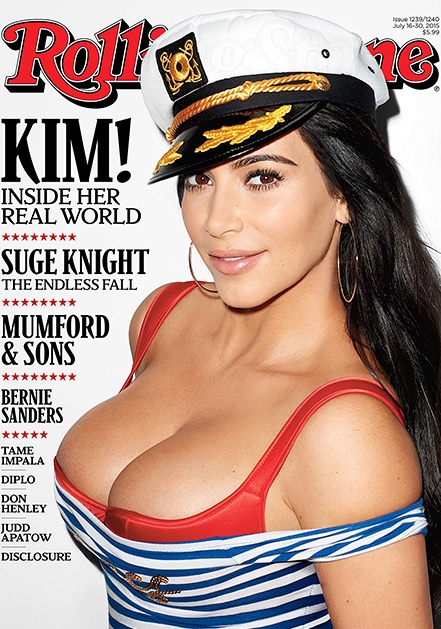 Rob Kardashian has been feuding with his momager, Kris Jenner, and sisters for months, but he recently shocked everyone by burying the hatchet with Kim Kardashian. Rob and Kim have been fighting ever since her Italian wedding to Kanye West – when Rob famously ditched the ceremony and flew home early. Since then, Kim had nothing nice to say about Rob and his weight gain and issues with depression and drug abuse, and Rob lashed out on social media and called his sister a “psycho bitch.”

This month, Rob and Kim began speaking to each other on Twitter again, and all appeared to be well. But it’s safe to say that the ceasefire is over – because Kim just totally slammed her little brother (again). Kim Kardashian was featured on the cover of this month’s edition of Rolling Stone Magazine, and in the exclusive interview with the Keeping Up With The Kardashians star, she discussed her brother’s weight gain – which is a huge “no no” and the entire reason that she and Rob were feuding in the first place.

Rob Kardashian is furious with his family because they keep discussing his demons on television and in interviews, and using his weight as a PR machine. In Kim’s Rolling Stones interview, the KUWTK star dished, “It’s not that mysterious what is happening with Rob. He has gained weight, he feels uncomfortable being on the show, and that’s OK. Do I think that he smokes weed, drinks beer, and hangs out with his friends and plays video games all day? Yes.” When asked by Rolling Stones if the rumors were true about her brother being addicted to meth, cold-hearted Kim laughed them off and joked, “No no. Or else he would be skinny.”

Ouch! It’s safe to say that by the end of this week Rob Kardashian will be throwing some shade at his sister on social media. And, we can’t really say that we blame him. What do you think of Kim’s interview and her “skinny” joke? Share your thoughts in the comments below!