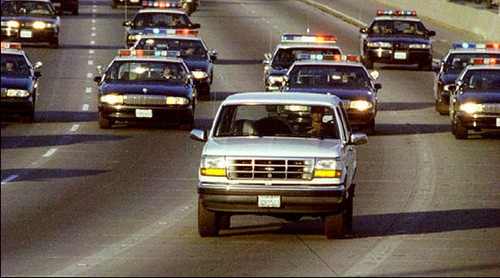 New details have been spilled about the O.J. Simpson murder trial and the role of the Kardashians during that tumultuous time in their lives. According to some new and shocking claims, O.J. Simpson tried to commit suicide in Kim Kardashian’s old bedroom prior to his iconic Bronco drive with a gun to his head.

According to Lawrence Schiller, who wrote “American Tragedy: The Uncensored Story of the O.J. Simpson Defense,” Simpson would have made some major headlines in the hours before the infamous white Bronco chase if Robert Kardashian hadn’t put a wrench in his plan.

O.J. Simpson allegedly planned to kill himself right there in Kim Kardashian’s bedroom as the investigation into his ex-wife Nicole Brown Simpson’s murder started to heat up. Schiller recently revealed to ABC News that Simpson was found in the reality star’s bedroom and had recorded a video that was intended to be his suicide note.

Kardashian found O.J. Simpson in Kim’s room just minutes after he made the tape. As the story goes, Robert then pleaded with O.J. not to kill himself inside Kim Kardashian’s room. The disgraced football star said he didn’t know how he even ended up in Kim’s room but he was in there with a gun and pictures of Nicole Brown Simpson and their children.

When Simpson informed Kris Jenner’s ex-husband that he intended to kill himself right there in that room, Schiller said Kardashian had to stop him. According to Schiller, the late celebrity attorney told O.J., “”My little girl Kim sleeps here. I can’t have my little girl in this bedroom, and every time I come in here, I’m going to see your body lying in this. You can’t do that.”

Of course O.J. didn’t end his life in Kim Kardashian’s childhood bedroom that day. Instead, “The Juice” went on to make some of the most memorable news in recent history with the infamous white Bronco chase caught on camera by possibly every news station in America.