Kim Richards Storms Out Of ‘Dr. Phil’ Interview After It Becomes A Surprise Intervention Alongside Children! (VIDEO) 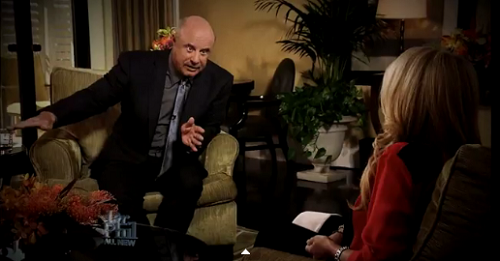 Kim Richards will face off against one of Dr. Phil’s pseudoscientific interventions on Tuesday’s shocking, storm-off-set episode. The Real Housewives of Beverly Hills star was arrested for roundhouse kicking a cop at the Beverly Hills Polo Lounge on the 19th of April – she was also intoxicated and half-blind-crazy.

Dr. Phil jumped at the opportunity to ‘save’ Richards from her hedonistic ways. In the exclusive interview, Richards tells Phil, “I am beating myself up over this. I poured a drink of vodka and thought, ‘Oh my God. What have I done?’” Hindsight is always 20/20, except if you’re drunk, then it’s more like 5/17/Tequila.

The discussion quickly deteriorates into a hellish ruse; Dr. Phil’s ‘exclusive interviews’ are never without incident. A sobbing, weeping, and semi-hysterical Richards goes nuclear when she realizes the supposed ‘interview’ is nothing more than a deceitful intervention. Richards eventually storms off set in a huff and a puff and a “that’s enough.” That’s how Dr. Phil rolls. He’s like David Copperfield – if David Copperfield had a bald head and a mortician’s smile.

Who gets a Noddy badge? Dr. Phil of course! Who gets an Alcoholics Anonymous pamphlet? Not Kim Richards.
What do you think? Is Dr. Phil an emotional manipulator? Why would anyone subject themselves to Dr. Phil’s smug and smutty quasi-psychology? Should Kim Richards get professional help? Let us know your thoughts in the comments below.