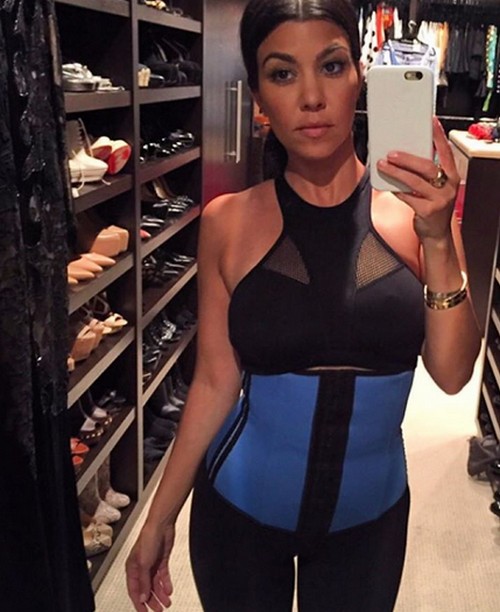 Kourtney Kardashian has been dieting like mad woman and working out every second she has free ever since her break-up from her baby-daddy Scott Disick. The Keeping Up With The Kardashians star has shocked everyone with her rapid weight loss since the birth of her third baby Reign earlier this year, but her pals are growing concerned that she might be losing too much weight. Does Kourtney Kardashian have an eating disorder?

According to a new report from Radar Online, some of Kourtney’s close pals and family members think that her obsession with losing weight and her “revenge body” has hit an unhealthy level. It’s common for girls to focus on bettering themselves and their bodies after a messy break-up, but Kourtney seems to be taking it a bit far over the course of the last few weeks.

An insider dished to Radar Online, “She’s stopped eating balanced meals and is driving herself into the ground with all her parenting and work responsibilities. The pounds are falling off and she looks gaunt and stressed, with huge circles under her eyes because she isn’t sleeping either.” The insider went on to add that Kourtney is still so torn up over her split form her baby-daddy, that eating food is the last thing on her mind right now.

Kourtney might as well give up on the whole “revenge body” plot – seriously is Scott Disick even sober enough to realize that she has lost over 20 pounds? Besides, he has reportedly moved on with various women, and stalking pictures of Kourtney online to see how she looks post break-up seems to be the least of his concerns. Do you think that Kourtney Kardashian has lost too much weight and is beginning to look unhealthy? Should her friends and family intervene before she has a full-blown eating disorder? Let us know what you think in the comments below!