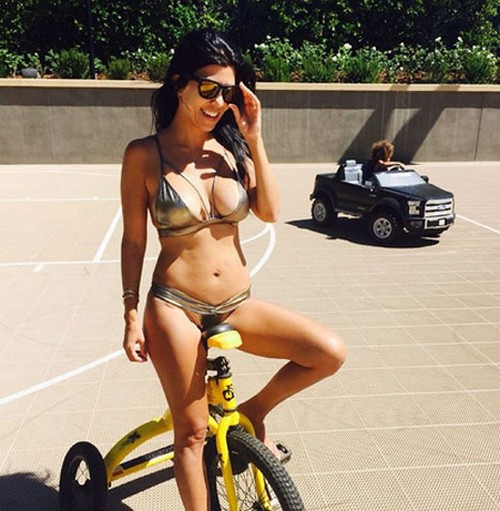 Kourtney Kardashian is over Scott Disick and desperate to get back in to the dating scene so that she can rub her hot new boyfriend in her baby-daddy’s face. Kourtney has been flaunting her new revenge body all over social media, but finding a boyfriend is turning out to be much more difficult than she anticipated. It turns out that it doesn’t matter how hot you are, or how many bikini selfies you post on Instagram – a single mother raising three babies by herself is basically guy repellent.

According to a new report from OK! Magazine, Kourtney has employed her sister Khloe Kardashian as her new matchmaker. An inside source dished to the tabloid, “Kourt wants to rub it in Scott’s face that she has moved on. His cheating made her feel unwanted. Khloe is eager to use her connections to fix her up with a high-profile hottie like Orlando Bloom.”

Kourtney Kardashian’s self-esteem is at an all time low. First Scott dropped her like a bad habit and publicly cheated on her, then her almost fling with Drake went bust when he ditched her for tennis pro Serena Williams. The only guys that seem to be willing to date a single mom of three kids are the ones that are more interested in Kourtney’s bank account than spending a romantic evening on a date with her.

Orlando Bloom might be a stretch though. Kourtney doesn’t seem like the “hit it and quit it” type, and Orlando Bloom is more into late night hook-ups than long term relationships and playing house with three kids. On the up side, she wouldn’t have to worry about Orlando using her for her money – because he has his own! What do you guys think? Will Khloe Kardashian be able to set up her unlucky in love sister with Orlando Bloom? Let us know what you think in the comments below!