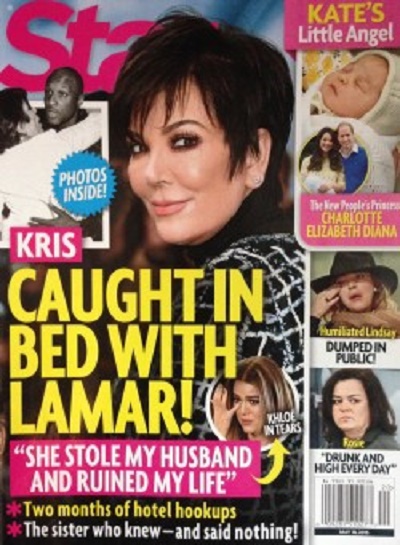 The latest cover issue of Star Magazine suggests that Kris and Lamar started having hotel hookups after Lamar’s divorce to Khloe, but Khloe Kardashian eventually found out – and then subsequently burst into tears, because that is what the Kardashians have to do for the camera’s sake. Apparently, Kris and Lamar initially met for a ‘heart to heart’, but quickly found themselves hooking up [anyone have an image of Kris throwing herself on Lamar?]. Then, ‘one of Lamar’s mistresses’ [because he had so many] walked in on them, but for whatever reason, all this is only coming out now…?

I would really, REALLY love it if this story was true and if Lamar’s mistress really did walk in on Kris and Lamar hooking up, even though we really shouldn’t be asking for anybody’s feelings and emotions to get hurt in the process. But it’s Kris Jenner, and we make exceptions for Kris Jenner. She’s so selfish that she makes Kim Kardashian look altruistic, and that’s quite a feat.

However, I doubt that Khloe Kardashian would have stayed so calm if she really did catch Kris Jenner, her mother, hooking up with Lamar Odom, her ex-husband – especially because she’s reportedly been trying to get back together with Lamar for the past two years.

Star’s cover also has a giant feature on the new royal baby, Princess Charlotte Elizabeth Diana. Poor girl – she’s forever going to be the spare heir, even if she doesn’t want to be.

And finally, a ‘humiliated’ Lindsay Lohan was supposedly dumped publicly, but at this point, is anything Lindsay does NOT construed as humiliating?